Elections to five city corporations, including the newly-formed Gazipur one, are likely to be held before Ramadan, election commissioner Javed Ali said on Monday.

“We may complete elections to the five city corporations at a time before Ramadan,” he said while talking to reporters at his Election Commission (EC) office.

The Ramadan is expected to begin on July 10 next.

Javed Ali added that the EC is likely to announce schedules for the elections at the end of May.

Replying to query, the Election Commissioner said they have sent their proposal to the Law Ministry for brining necessary changes to the Representation of the People Order (RPO).

Asked whether they included the provision for deployment of army during polls in the proposed RPO, he answered in the negative, but recognized that opposition BNP has sent them a proposal demanding army deployment during the polls.

In response to another query, Javed Ali said the commission will be able within one week after May 12 to finalise the changes in the boundaries of the 87 parliamentary constituencies on disposal of the objections raised by the ruling Awami League and opposition BNP.

Earlier, on February 6, the EC published the draft of redrawn parliamentary constituencies with changes in 87 out of the 300 constituencies ahead of the next general election scheduled for January 2014.

Jhumon Das gets bail for one year, no bar on release 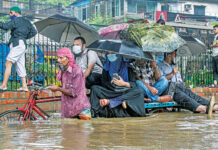 Flawed from the start

Prime Minister of the People’s Republic of Bangladesh since 6 January 2009: Predator since 2014 (at least)

Loan negotiation for metro rail, BRT from next week