What was once a startling thunderclap passed off as a whimper, what was welcomed by millions and celebrated as the rebirth of our democracy, went hardly noticed, what was termed as the victory of the people over the military did not receive any public attention. Is this inattention a statement of what democracy has now come to mean for us? A distant dream? Otherwise why such indifference?

I am of course referring to December 6, the day General Ershad fell from power in 1991 opening the door for our transition from dictatorship to democracy which has thankfully survived, but just, and terribly bruised. To repeat what I have recently written, it is Covid infected, with severely affected lungs and cannot breathe.

There are two very important reasons why the fall of General Ershad should never be forgotten or its significance underestimated. First, the grand unity of people and the political parties that caused his fall and, second, the system that was torn down along with him, a system that would have permanently brought the military into the governance process of Bangladesh.

Dislodging a military government through peaceful mass demonstration is one of the most significant achievements in our march towards restoration and strengthening of democracy. It proved that when people are united and when all opposition political parties come together they can dislodge a well-entrenched military backed government that ran the country since March, 1982. Usually military governments are replaced by another or changed through some revolutionary upsurge. But for the military to surrender to the majesty of public opinion expressed through mass agitation sans violence is without too many precedents. (To note on the side, it was because of his peaceful surrender to “people’s will” that General Ershad survived to continue in politics for nearly three decades and was to later become the “kingmaker” as the rivalry and bickering between our two major parties created the opening for him and his party to play that role).

The unity of the political forces—bringing together every colour and shade—created an indomitable “people’s force” that left no alternative to Ershad’s prime backer—the armed forces—to abandon him, triggering the final eruption  of an earthquake that had been simmering beneath the surface over the past several years. The message to the military leadership of the present and the future, not only in Bangladesh but perhaps the world over, was not to cross the line and to remain duty bound to perform its constitutional task and not go beyond. Our armed forces heeded that lesson and they are so much the better for it now, a fully professional army earning us laurels through their peacekeeping work.

What was the system of governance that General Ershad’s coup and his administration represented? Simply put, the legitimisation of the military’s involvement in running the country and setting up of a permanent mechanism, through constitutional amendment, for the army’s participation in government. His proposal, he said was to solve the “deep seated politico-military problem” and to ensure that “coups and killings do not take place a year, 10 years later or ever again.” What a wonderful idea, to prevent future coups General Ershad was suggesting a permanent coup! His formula was to make the political forces subservient to the military elite or at best put them on an equal footing so that the military and the civilian government could run the country together. This would have permanently politicised the military destroying them as a professional fighting force for which the taxpayers are ungrudgingly and relentlessly paying.

It was this idea of perverting democracy and the plan to permanently destroy the notion of “sovereignty of the people” that was defeated when General Ershad was toppled. And there lies the significance of his fall and the importance of commemorating that event.

When discussing the Ershad period people focus on his corruption and personal life. The real significance of his regime was that he wanted to create a permanent place for the military in running the country. It was rumoured that he even sent delegations to Turkey and especially to Suharto’s Indonesia to learn first-hand about how to incorporate the armed forces structurally into the governance process.

When he ultimately gave up all his pretensions and removed President Sattar and took over power in March 1982, it was within four months of Sattar winning an election held in November the year before. None of the excuses that the military usually uses to take power—social unrest, economic crisis and political instability—existed at that time to remotely justify General Ershad’s move except perhaps his own ambition and those of many other senior army officers having gotten used to power, glory and wealth during General Zia’s regime, the man who really started the process of militarisation of the administration.

Both to appease his base—the army—and also to quell the unrest within, Ershad began a massive project of infiltrating the administration with army personnel in ministries like defence, establishment, home and foreign affairs. In 1987 about 1,500 army personnel were appointed in government services. At one point 53 out 64 SPs in districts were former military officers. (see “The Shahabuddin Interregnum” by Muhammad A Hakim, 1993). All his early cabinets had an overwhelming majority of army officers.

But today’s question is not to ask what Ershad’s 9-year rule did to us, but to ask what did we do with such a glorious victory of the people, of the political parties and of DEMOCRACY that his fall symbolised? What did the democratically elected governments that followed Ershad’s fall do? Did we get rid of corruption, abuse of power, cronyism, destruction of institutions, personal chicanery and mal-governance for which his regime was relentlessly condemned and ultimately toppled?

One of the most virulent objections to Ershad’s rule was corruption. Business leaders and entrepreneurs who were in business then and continue today smile when asked to compare and say without hesitation that the former corrupts were mere kids compared to the seasoned corrupts of today. The amounts involved sound like “peanuts” when we publish stories of drivers and clerks of ministries owning thousands of crores. Doesn’t it tell the whole story? Imagine what we would have learnt if the “big fish” came under the purview of the law. The billions of dollars that are syphoned out of the country each year narrate a story of their own.

About moral degradation, the “Papias” and the casino owners say it all. The widespread use of drugs and the yaba epidemic, which could not have occurred and continued for so long and in such a widespread manner without support of the institutions concerned, add further to the narrative.

About “rights and freedoms” a military or quasi military government can never look better than an elected one but the existence of laws like the Digital Security Act (DSA) point to a different reality. Seldom has a law as repressive, as reprehensible and as “rights destroying” as the DSA existed under a democratic dispensation. Compared to past black laws, DSA’s all-encompassing formulation, the vagueness of the articles, enormity of power to punish makes it an ever present instrument of fear and hatred. Its widespread use enabled by digital technology that gives it a reach and an instant presence never before enjoyed by any other law, makes it the most dreaded and despised enemy of private life and public rights. History may judge this regime harshly simply because of this one law, overshadowing some of its most brilliant successes that it can legitimately lay claim to.

And there are plenty of successes to write about. Development is this government’s brightest star deserving the highest of accolades there is. The transition from a “Basket case” to “basket full of prospects” is one of immense significance. It has given us a sense of performance based self-confidence which is crucially needed for any country to move forward. The fact that we have moved from LDC to middle income country as judged by the UN and from LDC to lower middle income country according to the World bank and are poised to move to the next echelon is an achievement of tremendous significance and for which this government and Sheikh Hasina personally deserves a lot of kudos. However, the sobering thought that our rich-poor gap is rising at an alarming rate and that itself can upset our other achievements through social unrest should not be too far from our minds.

However, it is in democracy building that our deficit is most disturbing. People’s will, people’s opinions,people’s participation in decision making, people’s rights, people’s freedoms—everything to do with the people is what democracy is all about. Where is the “people” in today’s Bangladesh? Where is the connection between the people and the government? How does the government know what people want, are thinking, what they are happy or unhappy about? Where is the communication? Will it only be through intelligence reports or party narratives? If those who speak, those who listen and those who applaud are from the same ilk then some serious self-examination is called for. Where is the independent voice and what importance is it given? However well-meaning a government is, it is bound to get disconnected unless independent and credible channels of communication are not only kept open and not termed as “enemies”, but are sought, supported, welcomed and seen as an essential part of a good governance process.

Let’s not give Ershad the pleasure of the last laugh. Please.

Mahfuz Anam is Editor and publisher, The Daily Star. 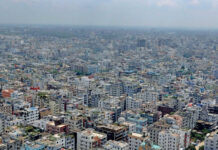 Overpopulation in Dhaka getting out of control 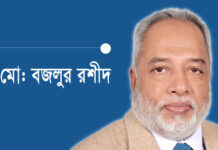 Covid-19 diagnosis and the reporting curve in Bangladesh