The country’s apparel export to the United States fell by 2.29 per cent to $4.83 billion in 2014 from $4.94 billion in 2013 amid increase in competitive edge of Vietnam, India and Sri Lanka.
Experts and exporters said the US buyers shifted orders from Bangladeshi factories that run business on shared buildings due to compliance issue. On the other hand, Bangladesh’s competitor countries gained more space in the US market due to depreciation of their currencies against the US dollar.
Vietnam’s export earnings from readymade garments to the US market increased by 14.06 per cent to $9.26 billion in 2014 against $8.12 billion in 2013, according to US Commerce Department data released last week.
The data showed that the India’s apparel export to the US rose by 5.89 per cent to $3.40 billion in the period against $3.21 billion in 2013.
Apparel export earnings of Sri Lanka to the US increased by 6.68 per cent to $1.75 billion in 2014 against $1.64 billion in 2013, according to the US data.
Two factors — external and domestic — are active behind the negative export growth to the US market, Khondaker Golam Moazzem, additional research director at the Centre for Policy Dialogue, told New Age on Saturday.
‘Recently the currencies of some of our competitors like Vietnam and Sri Lanka depreciated against the dollar and so the buyers are feeling more comfortable in importing apparels from those countries,’ he said.
The competitiveness also depends on the exchange rate and the appreciation of the Bangladeshi currency against the greenback discourages buyers, Moazzem said.
On the other hand, he said, the compliance issue was also a factor for the fall of export to the US market as many buyers were shaky to place their orders in the factories housed in shared buildings.
Readymade garment export to the US declined due to the negative impact of industrial accidents and political turmoil in 2013, said Shahidullah Azim, vice-president of Bangladesh Garment Manufacturers and Exporters Association.
Some of the buyers shifted orders to other countries due to the political turmoil and some others shifted the orders from shared buildings after the Rana Plaza building collapse due to compliance issue, he said.
‘I hope the buyers will come back and the export to the US will rebound soon as we have made significant improvement of in the sector in terms of safety issue as per the requirements of the buyers,’ Azim said.
According to the Export Promotion Bureau, readymade garment export to the US market in the first seven months of the financial year 2014-15 fell by 3.58 per cent to $2.93 billion against $3.04 billion in the same period of the FY14. 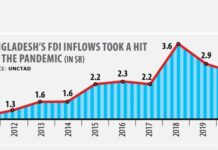 Bangladesh’s expectations from the Biden government