Ruling Awami League leaders on Friday said that Bangladesh needed the leadership of prime minister Sheikh Hasina for a longer period of time as the country was making one achievement after another under her leadership.

They told a rally in the city that BNP chairperson Khaleda Zia would unleash a reign of terror if came to power again.
The rally, followed by a ‘victory procession’ was organised at Suhrawardy Udyan to celebrate the homecoming day
of Sheikh Hasina, also the AL president, and different successes of the
party, including victory in the mayoral polls in three cities and the land
boundary agreement with India.
The victory procession started from Suhrawardy Udyan at about 5:00pm and terminated at Bangabandhu Bhaban at Dhanmondi.
The brief rally was presided over by Dhaka city AL acting president MA Aziz.
Awami League presidium member Matia
Chowdhury said that the land boundary agreement with India had come into reality because of
the bold leadership of prime minister Sheikh Hasina.
‘Sheikh Hasina means successes while Khaleda Zia means communalism and terrorism,’ she said adding that the country had made the achievements in recent years because Awami League was in state power.
Matia, also agriculture minister, said that the BNP, which had earlier termed the LBA an agreement of ‘slavery’, was now hailing its ratification by the Indian parliament.
Dhaka city AL acting general secretary Mofazzal Hossain Chowdhury Maya, also disaster management and relief affairs minister, urged the leaders and activists to work sincerely for the party so that it could stay in state power for a long time. 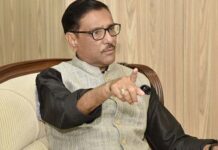 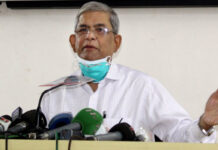 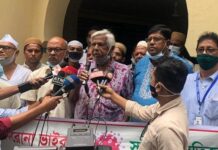