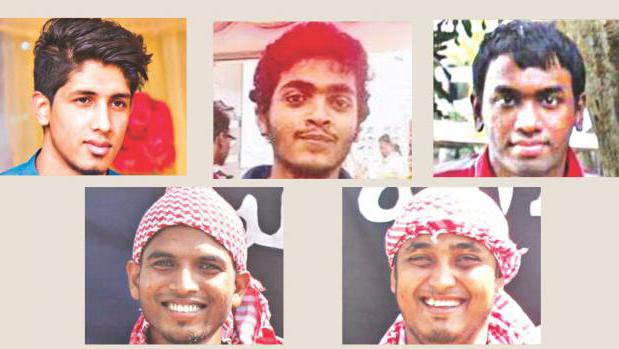 The dangerous fate of Fahim, Rohan, Mubasher and Nibras shows how our youths are becoming weapons of destruction if they are brainwashed and transformed into militants.

Faizullah Fahim, who was killed in a so-called “gunfight” with police on June 18, was an accused of attempting to murder a Madaripur college teacher by hacking him.

The 18-year-old disappeared in the middle of his HSC exam and travelled to Madaripur from Dhaka to kill the Hindu teacher.

His father filed a “missing person” diary with a police station in the capital on June 11, but found him only after he was dead.

Shocked by the untimely demise of his son, Golam Faruk said his son was brainwashed by some unknown persons. Two weeks later, we found three more youths who in a similar fashion had gone missing between December 2015 and February 2016. They were found dead after they carried out a brutal attack at the Dhaka café killing 20 hostages, most of them non-Muslim foreigners.

Fathers of both Meer Sameeh Mubasher and Rohan Imtiaz said their sons were brainwashed. After their disappearance both fathers had filed diaries with the police, asking for law enforcers’ help to find their sons in vain.

Imtiaz Khan and Meer Hayet Kabir identified their missing sons Rohan and Mubasher respectively only after their photos were released following their death in Operation Thunderbolt carried out by Army-led joint forces to rescue the hostages from the café.

Friends of Nibras, another attacker of the Holey Artisan Bakery in Gulshan, had been surprised noticing his sudden change. They however could not imagine Nibras, a student of a Malaysian university, could be transformed into a dreaded militant. He returned home from Malaysia without completing his study. His family had earlier informed police about his disappearance.

It appears none of these boys held extreme religious belief in their early years, but they were brainwashed and changed only recently.

Rohan, Mubasher and Nibras who joined others to carry out the Gulshan café attack came from affluent families. They were also meritorious students. They could not be hired to do the heinous crime as they were not in need of money. Then why did they risk their lives for killing others though they did not have any personal enmity with their victims?

Intelligence reports, as published in the media, say youths who are brainwashed leave home in a planned way and join militant groups. They are trained at home and abroad on how to operate sophisticated firearms and how to carry out deadly operations.

They are also brainwashed in such a way that they do not hesitate to sacrifice their lives.  They are convinced that Islam would be “served” by the killing of non-Muslims and freethinkers who reportedly criticise Islam, intelligence officials say.

In the present context we need to ask ourselves a lot of questions and find their answers.

There are still some youths who remain missing, according to media reports, and we do not know the exact number. Do their parents know their whereabouts? Have they informed the police about the disappearance of their boys? What are the police doing to bring them back?

Are we aware of our teen boys’ daily lives? Where do they go and whom do they meet? What do they read? Do we give our youths quality time to understand them properly and remove any extreme thoughts and beliefs if such thoughts and beliefs grow in their minds? In our homes, schools and mosques, are our boys learning any twisted versions of religion?

Figuratively, teens are like clay and can be given any shape. This is why militant groups target them and transform them easily into militants.

The law enforcement agencies should play very assertive role to create congenial atmosphere for our kids. They need to strike with an iron hand those who target our youths.

However, police alone may not be able to fight extremism as it has taken a deep root in our society. We are collectively responsible for this.

As parents we must be aware of the looming danger and raise our voices for a change in the society. Otherwise, we may suffer the anguish like the parents of Fahim, Rohan, Mubasheer and Nibras.

Like fathers of Rohan and Mubasheer, we may have to apologise to the nation if our boys act like monsters instead of human beings.

Nothing is more painful than the agony of parents carrying the dead bodies of their boys who died terrorists.

Can the nation endure misery of continuing confrontation?

No love lost between ‘em