A senior police officer has instructed policemen to do whatever they “deem necessary” to protect people as death toll during the BNP’s ongoing violent street campaign keeps mounting. 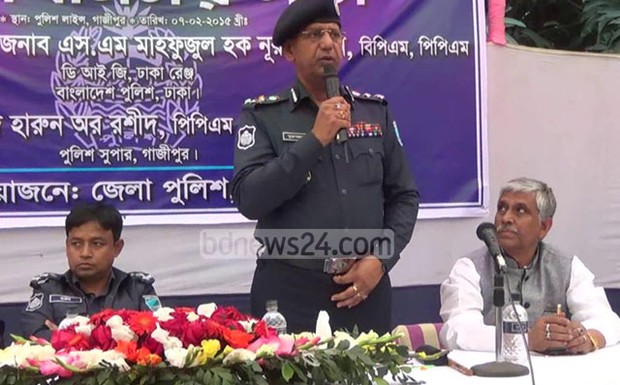 “I’m asking you to do whatever possible to catch those who kill people and destroy properties,” he said. “I’ll take full responsibility for any eventualities.”

At least 60 people have been killed since the BNP, which boycotted the 2014 general elections, called the blockade on Jan 5 to press for a snap election.

On Friday night, 10 people were killed in two separate arson attacks in Gaibandha and Barisal.

Prime Minister Sheikh Hasina on Jan 28 ordered police to stop violence “at any cost” saying she would “take all liability”.

DIG Nuruzzaman on Saturday asked police to justify issuance of firearms to them.

“We’ve been issued weapons to protect the people, ensure safety of public and private properties,” he said.

He was speaking at a views-exchange programme with local freedom fighters, leaders of ruling Awami League, its youth and student affiliates.

“Join us in the fight against saboteurs,” the police officer said.

10 JMB men to hang for suicide bomb attack in Gazipur