The government is set to finalise a memorandum of understanding today to form a joint venture between the state-run Power Development Board and US firm General Electric to build and operate a 3,000MW power plant without any tender.
The joint venture will also build infrastructures to facilitate gas supplies to the power plant from imported liquefied natural gas, said power board officials, adding that the cost of the project on Moheshkhali Island in Cox’s Bazar was estimated at $3 billion.
The power division is scheduled for today to host an inter-ministerial meeting to finalise the draft memorandum, power board chairman Khaled Mahmud said.
With this, the government has cleared way for big investments of about $6 billion from two multinational companies at the fag end of its second consecutive tenure.
On November 5, 2017, state-run North-West Power Generation Company signed a memorandum with German firm Siemens AG to build and operate a 3,600MW LNG-based power plant near 1,320MW coal-fired power plant at Payra in Patuakhali.
Both the projects will be implemented under the Speedy Supply of Power and Energy (Special Provisions) Act 2010 that indemnified officials concerned against prosecution for awarding contracts without tender, said officials.
The PDB-GE joint venture will supply electricity as an Independent Power Producer under the Private Sector Power Generation Policy, they said.
Energy expert M Tamim, also former special assistant to the chief adviser of interim government, criticised the recent government moves to award ‘questionable’ power generation contracts without tender.
There is no justification for awarding contracts for such large power plants without tender, he observed, adding that awarding contracts for 50-100MW power plants might have some necessity to tackle emergency situation in 2009-2010.
Consumers Association of Bangladesh energy adviser M Shamsul Alam said that there was no fair competitive process in place in awarding contracts in power sector.
‘Dark power has gripped the entire sector although
electricity is meant for eliminating darkness,’ he said.
The experts recommended fair bidding process in the sector to ensure transparency and to obtain the best services at the lowest prices.
They also said that the use of the speedy supply act had already created controversies in the sector.
On March 29, the power, energy and mineral resources ministry decided to seek further extension of the act for three more years until 2021 after its expiry on October 11, 2018.
Utilities under the power and energy divisions have so far awarded numerous contracts without tenders under the act drawing criticism as the procurements were much expensive than those awarded through bidding.
Among the power sector projects, 35 contracts signed by the power board to buy power from 15 quick rental, 5 rental and 15 independent power suppliers from 37 plants with a combined generation capacity of about 3,000MW for 3-15 years were most significant in terms of effect on power sector and the economy. Most of the quick rental and rental power suppliers obtained extensions for 3-8 years under the act. The contracts were signed by 2015.
In 2017, the power board again awarded 11 contracts for buying pricy electricity from private sector power plants with about 2,000MW combined capacity for 5-15 years.
Contracts for supplying 500 million cubic feet of gas from imported LNG and installation and operation of a 726MW power plant to be set up by India’s Reliance in Bangladesh were awarded without bidding.
In the same way, India’s Adani bagged a contract to supply electricity to Bangladesh from a 1,600MW plant to be installed in Jharkhand.

Should nuclear play a part in the energy solution? 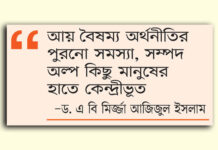