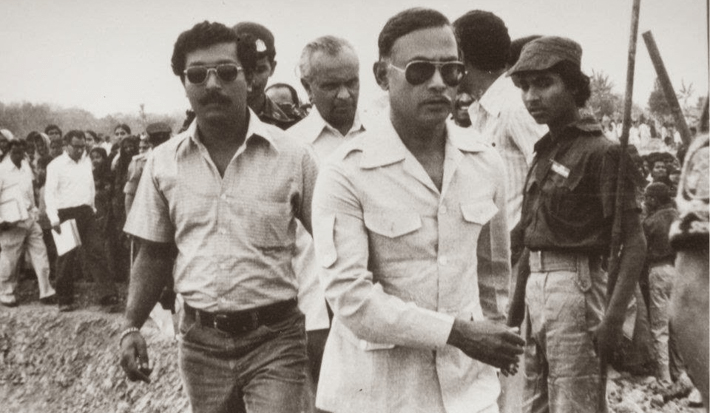 President Ziaur Rahman
By R Chowdhury
23 May 2019
Following my escape from Pakistan Army in 1971, I was posted to Z Force of Colonel Ziaur Rahman in the eastern theater of the Bangladesh liberation war. The nearly 20-day journey took me from Lahore to Khem Karan to Rajoke to Ferozepur to Delhi to Kolkata to Agartala and finally to Masimpur, Headquarters of the Number 4 War Sector, on a late afternoon. Colonel C R Dutta received me warmly on the verandah of a tin shed building. A humorous person, his Sylheti accent was unmistakable. They had information sent from Agartala.
“Dutta da,” I heard a familiar voice coming across the partition of my temporary accommodation. I walked over and found a gentleman in khaki, half-lying on the bamboo platform used as a bed, talking to the Sector Commander. Semi-darkness did not reveal his face clearly.
“Salamualikum, Sir,” I wished and introduced myself. The man sat up and said, “So you are the Captain who came to raise my artillery. Sit down.” My brain was struggling to recall the identity. Second Lieutenant Sajjad Ali Zahir, another escapee from West Pakistan and posted to my unit, joined me at Agartala. He followed me to the room. As I introduced Sajjad to the man, the name instantly flashed across my mind. “Major Ziaur Rahman,” I told Sajjad. The moment I noticed his new rank, I corrected my statement, “Sorry, Colonel Ziaur Rahman.”
– See more at: http://southasiajournal.net/unforgettable-zia-as-i-knew-him/