Typhoon Hagupit is sweeping across the eastern Philippines, toppling trees and power lines and threatening coastal areas with a powerful sea-surge.

Reports from the city of Tacloban, where thousands were killed by Typhoon Haiyan a year ago, say the roofs of some buildings have been blown away.

More than half a million people have fled coastal villages.

The BBC’s Saira Asher in Legazpi in the south of Luzon island says everyone is off the streets and taking shelter.

Hagupit, known locally as Ruby, was packing maximum sustained winds of 175km/h (109mph) and gusts of 210km/h (130 mph) when it made landfall in Dolores in Eastern Samar province.

So far there have been no reports of casualties, although phone lines are down in many areas.

Carin van der Hor, international country director for the charity Plan in the Philippines, described Tacloban as a “ghost town”.

Maulid Warfa, the head of Unicef’s field office in Tacloban, said their five-storey concrete building was shaking under the force of the storm.

Speaking early on Sunday he said: “We’re in this dark building and it’s raining heavily and there’s no electricity and we are using candles.

“We have a generator… but because of the rain and the flood and power problems we have switched it off. It’s too dangerous.”

Mr Warfa added: “Our concern now is not us sitting in this building. Our concern is for the little children who have had to go through this experience for the second time in 13 months.”

Joey Salceda, governor of Albay province where Legazpi is situated, told the BBC that the main lesson from Typhoon Haiyan had been to prepare well and to evacuate people from vulnerable areas.

“That’s what we’ve been doing, so our principal instrument to achieve zero casualties is essentially evacuation,” he said.

“It doesn’t happen overnight so you need to train people. I feel confident we can achieve our zero casualty goal.”

Experts say that although Hagupit isn’t as powerful as Typhoon Haiyan, it is moving more slowly and will have a longer impact.

Officials said that there had already been damage in Dolores.

“There are many trees that have toppled, some of them on the highway,” police spokesman Alex Robin told AP news agency.

“We are totally in the dark here. The only light comes from flashlights.”

Haiyan – known as Yolanda in the Philippines – was the most powerful typhoon ever recorded over land. It tore through the central Philippines in November 2013 leaving more than 7,000 dead or missing.

Hagupit’s huge diameter of 600km (370 miles) meant that about 50 million people, or half the nation’s population, were living in vulnerable areas, officials have said. 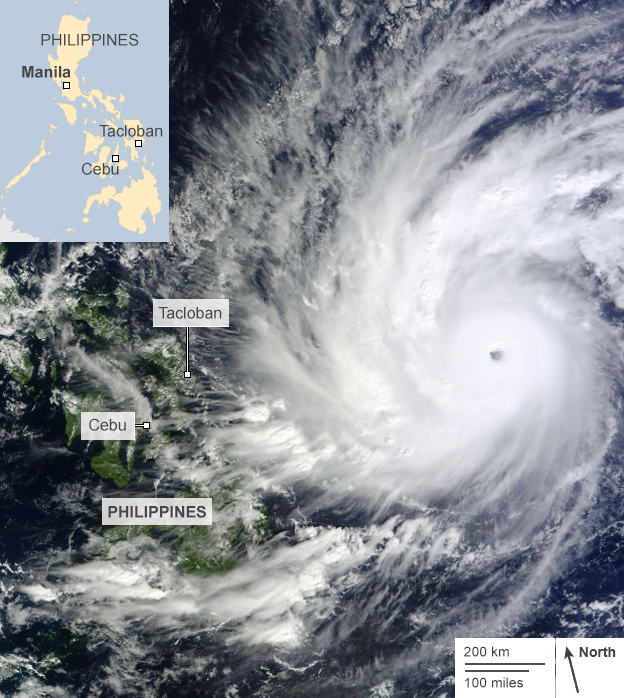 Xi to lead China for next decade