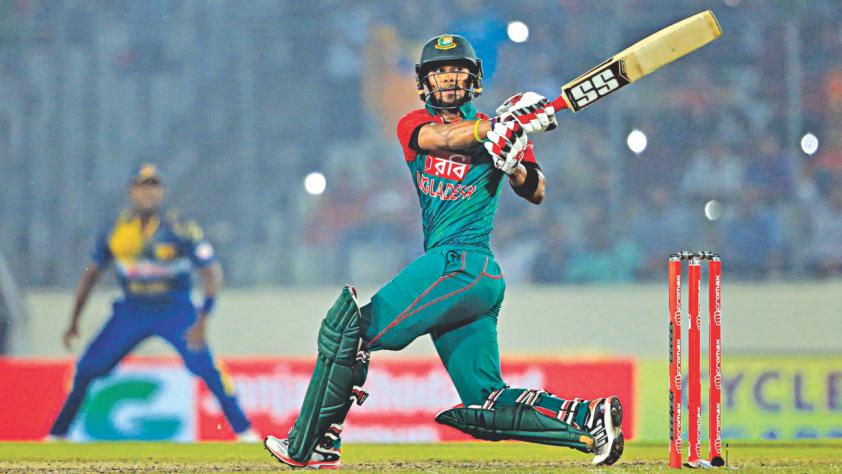 If it was a one-man show from Sabbir in the batting department, it was a concerted bowling effort backed by electrifying fielding that took the team to a 23-run victory in defence of 147 runs.  Sabbir hit 80 off 54 and the rest scored just 67 off 66 including extras. The right-hander played shots all over the park as 29 runs came from the off side and 51 from the on side. He picked up 20 singles and one couple besides 10 fours and three sixes that showed how ideal and magnificent the innings was from a top-order batsman.

Finally, the bowlers made sure that Sabbir’s best knock will not go in vain despite a few dropped catches.

In chase of a target of 148, the wobbling Sri Lanka batting was never on top. The tight bowling and wickets at regular intervals saw the run-rate climb and Sri Lanka finally managed to taste their first defeat against the Tigers in five matches.

The turning point of the second session was when Mahmudullah Riyad bowled a faster, short ball as he saw Dinesh Chandimal shaping to reverse-sweep and the batsman, who got a life in the very second ball courtesy of Soumya Sarkar at second slip, hit to the safe hands of Taskin at deep point for a run-a-ball 35 in the 11th over.

In the next over Shakib Al Hasan, who gave the first breakthrough removing Tilakaratne Dilshan with the help of Soumya’s brilliant running catch, bowled it shorter and wide of off stump when Shehan Jayasuiya left his crease early and keeper Nurul Hasan did the rest of the job.

Then another intelligent delivery from Mustafizur Rahman virtually killed the Lankans’ hope. Taskin failed to hold a high catch at fine leg to reprieve danger man Thisara Perera, who snatched away a victory batting at number eight when the two teams met in Chittagong two years back, to deprive Mashrafe Bin Mortaza from another wicket in the last ball of the thirteenth over but Mustafizur in the next over brilliantly changed his length to trap the batsman in front.

From 85 for four in 13.2 overs, Sri Lanka required a miracle but Bangladesh bowlers made sure that did not happen.

Earlier Shakib Al Hasan chipped in with a 34-ball 32 and Mahmudullah Riyad’s clean hits during his unbeaten 12-ball 23 gave a good total of 147-7, but it was the story of in-form Sabbir Rahman, who played with a mixture of sensibility and aggression. When the right-hander walked back to the dressing room, the team total was 108 and his contribution was 80.

Bangladesh captain Mashrafe Bin Mortaza won the toss and decided to bat first on a wicket which was all together different than the previous ones as the green-tops were dispensed with. The other advantage was that Sri Lanka skipper Lasith Malinga missed the crucial game due to injury.

The Tigers however made a terrible start losing three wickets for 26 runs inside five overs. In the second ball of the innings stand-in Sri Lanka skipper Angelo Mathews pitched short of a length outside off and got it to jag back in a fair bit which beat Mohammad Mithun completely in front while in the second over Soumya Sarkar dove lazily on the up against Nuwan Kulasekara and got a leading edge to land at the safe hands of Mathews at mid-off.

Bangladesh were 2 for 2 in 2 overs but Sabbir launched a counter-attack as a lofted shot for six over long-on, a cracking drive and a good placement between point and third man for boundaries earned 18 runs from the fourth over. The momentum was lost in the next over as a yes-no Mushfiqur Rahim went for a tricky single only to mix up with his partner to return to the dressing room for 4 off 9 balls.

Sabbir however continued his leather hunt in the next over by smashing three boundaries; a slog to the third man boundary, a drive with full of power and a magnificent pull. Sri Lanka introduced spin in ace left-armer Rangana Hearth and he along with off-spinner Shehan Jayasuriya kept two Bangladesh batsmen in check as the hosts completed 10 overs with 57 runs.

Sabbir however took charge against Jayasuiya in the 13th over as he swept from the middle of the bat for six before hitting two consecutive boundaries.

A clean hit from Sabbir saw the ball flying over the deep midwicket fence and a first century by a Bangladeshi batsman in the T20 format seemed to be on the cards but the last ball of the 16th over saw the right-hander’s slog sweep against pacer Dushmantha Chameera find Jayasuriya at midwicket and thus ended a magnificent knock.

Champaka: Bangladesh U-18 pacers have got the potential