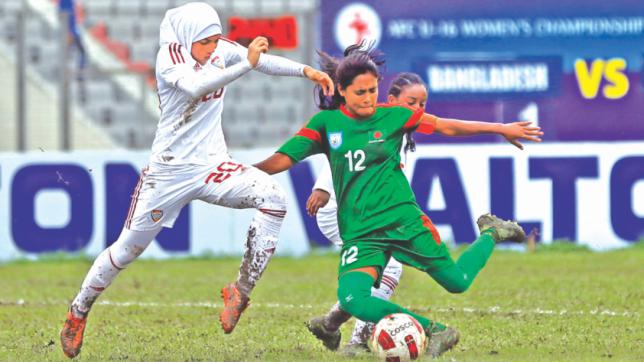 Bangladesh ended their brilliant AFC U-16 Championship Qualifiers campaign with a hundred per cent record after thrashing United Arab Emirates 4-0 in their last Group C fixture at the Bangabandhu National Stadium yesterday.

Skipper Krishna Rani Sarkar scored at the start of both halves — taking her tally to eight goals in the campaign — before Anuching Mogini added the third and substitute Tohura Khatun put the icing on the cake with a fourth three minutes before the end of play.

Having already sealed their spot in the final round of the championship after victory against Chinese Taipei on the previous match-day on Saturday, the hosts were not at their lethal best on a soggy pitch yesterday, yet they had enough firepower to stroll past UAE.

The win not only capped off a magnificent campaign by a set of under-privileged girls, who have started kicking a football barely five years ago and have come from remote villages, but also exceeded all expectations. To be honest no one had expected these girls would blow away anything and everything that came in their way and score a staggering 26 goals against two in the six-team Group C qualifiers. The girls have not only proved that they are the best team of the group but also the best entertainers with an attacking brand of soccer.

Their 3-0 win against Iran, a 5-0 victory over Singapore, a 10-0 thrashing of Kyrgyzstan followed by a 4-2 win against Chinese Taipei still could not reflect how well they played in the tournament to claim          a rightful place in the eight-team final.

Bangladesh will play as one of four group qualifiers alongside four automatic entrants — North Korea, Japan, China and Thailand — in the final round which will be held in Thailand next year. Australia  have confirmed their qualification from another group while the two other group winners are yet to be decided.

A qualification in the final means a bigger challenge ahead and playing against Asia’s top guns for the first time can be a fearful prospect for any team. But these girls are a different breed. They have grown up battling every conceivable adversity on and off the field. And fear is something not in their dictionary. What they need is a little bit of care, a bit more modern training facilities and a bit of financial support for their struggling families to carry on with their sheer willpower to floor another frontier.

“We have achieved what we had to in this competition. But the next target is much tougher. We will need to train a lot more over the next year and play against much higher opposition if we have to compete with the big teams,” skipper Krishna Rani told reporters at the post-match briefing yesterday.

In football the captain’s armband is more ornamental but Krishna Rani is an example of a true      leader. She has not only scored a stunning eight goals in the meet            but also proved that she was by                far the best player among the six teams. 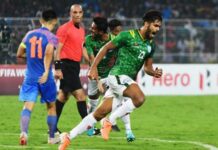 End of 2022 is Blatter’s preference to overcome Qatar heat