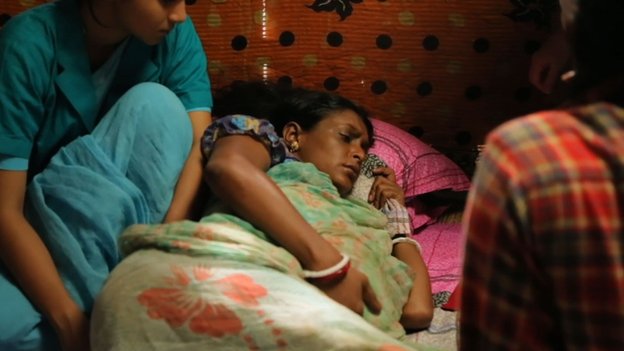 More than 350,000 babies are born globally every day. Yet in many cultures it remains a mystical and deeply superstitious act. Now expertise from the UK’s TV hit Call the Midwife is helping people in Bangladesh to break the taboo and improve the health of mothers and babies.

Twenty-two-year-old Bimola is lying covered in robes on the floor of her home. She is surrounded by two women anxiously waiting to help her through the birth of her first child.

It is a tense moment and expectations are riding high.

“Cut, cut, cut!” The crew pause and prepare to shoot the scene again.

And the series, which translates as Sailing against the Tide, is the first in the country to realistically depict a woman going through labour.

This was a leap of faith in a conservative culture where childbirth is rarely openly discussed.

Even in the face of a very obvious bump, a woman will often not be asked about her pregnancy by anyone except a few very close female relatives.

So such scenes risked leaving the audience red-faced and reaching for the remote.

However, some of the reaction has been quite the opposite.

“The labour scene could be sensitive for older people who think men shouldn’t know about it,” says a young father in Barisal district of Southern Bangladesh.

“But I think it should be shared with everyone.”

“I don’t think it was nearly as shocking as people expected it would be,” says Terri Coates, a British midwife who advises the show’s director and also consults on the set of UK drama, Call the Midwife.

“There was nothing exposed apart from an ankle, yet it was an authentic birth.”

Joining a primarily male production team, Coates is charged with bringing realism to everything from the way the actresses move to the noises they make during contractions.

She even helps create bloodied umbilical cords, although for the sake of cultural modesty the actress is mostly covered.

The birth stories are all part of bigger storylines about early marriage, family disputes and general life in rural Bangladesh.

But there is a serious purpose to bringing pregnancy and birth into the open.

Despite significant improvements in maternal and infant mortality in Bangladesh, every day 20 women die in childbirth and 300 babies die in their first month of life.

“I think it’s very important for people to know about these things,” says Georgis Bashar, the programme’s director, “because many children and mothers have been lost due to lack of knowledge and superstitions.”

The ‘magic’ of pregnancy 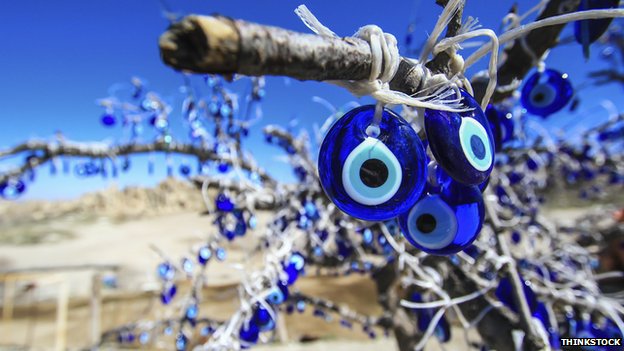 Evil eye – Many cultures believe in the threat posed by the evil eye, which can be cast simply by looking at somebody in an unkind or envious way. It is said to cause bad luck or harm to those under its influence.

Herbal enemas – Herbal enemas involve placing plant products inside the rectum in the belief that they will help produce a strong and healthy foetus and an easy labour. A study in Cote D’Ivoire showed that herbal enemas are used regularly throughout pregnancy. While some plants may well have beneficial effects, some can lead to internal bleeding and miscarriage.

Reading the bump – In Europe, it is common for everyone from family members to strangers at the supermarket to offer up a prediction of a baby’s gender based on the shape of the mother’s bump. If the weight is high up and at the front, then it’s a boy. If it’s spread around the middle, it’s a girl. The reality is often different.

These traditional beliefs vary from place to place but include restricting movement at noon and in the evening due to the increased activity of evil spirits, and sleeping by brass objects to ensure the baby has fair skin.

There is also a belief that lunar and solar eclipses can affect pregnant women and cause children to be born with physical deformities.

Research conducted by BBC Media Action found that although most people in Bangladesh understood these beliefs to be superstitions, they tended to follow them anyway – especially if it was easy to do so.

“They [our grandparents] followed those rituals, so we also follow them,” says a young woman from Natore district in Northern Bangladesh.

“Should we not follow the advice of our seniors?” 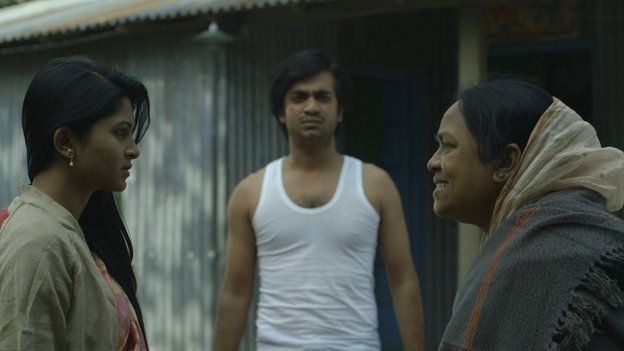 Superstitions aside, perhaps the most damaging is the cultural embarrassment surrounding pregnancy – due to the implicit admission that such a woman must be sexually active.

By not talking about it, some women are left poorly informed or completely unaware of potentially fatal risks to herself and her baby.

BBC Media Action, which produces the series, is trying to break the silence by bringing the issues of antenatal check-ups, newborn care and identifying problems during labour straight into people’s living rooms.

“We want Ujan Ganger Naiya to appeal to the entire family because, in Bangladesh, decisions about women’s and children’s healthcare are often made by their husbands or their mothers-in-law,” says Dr Kathryn Tomlinson from BBC Media Action.

“So it’s important to think about all the potential decision-makers, not just women themselves.”

But Bangladesh is by no means the only country using technology to get health information to pregnant women.

In Ghana, people can sign up to the Mobile Midwife programme, which sends health messages and reminders about antenatal appointments directly to their mobile phone.

Research by the Grameen Foundation, one of the project’s collaborators, found that receiving personalised voicemail messages led to an increase in social status for the women using the service.

This made them more likely to attend check-ups and to listen to the health advice being offered.

Back on the set of Ujan Ganger Naiya, the filming of the birth scene is complete and the team pack up for the day.

And with the second series due to be broadcast in the spring, midwife Terri Coates thinks showing childbirth on Bangladeshi TV is not so taboo after all.

“Really it could have been any drama anywhere in the world.”

The Commonwealth: What is it for?

Quality education is an economic priority