Late replacement Lendl Simmons led a charmed life to blast 82 not out and carry West Indies to a nail-biting seven-wicket win in the last over against India in the second semi-final of the World Twenty20 on Thursday. 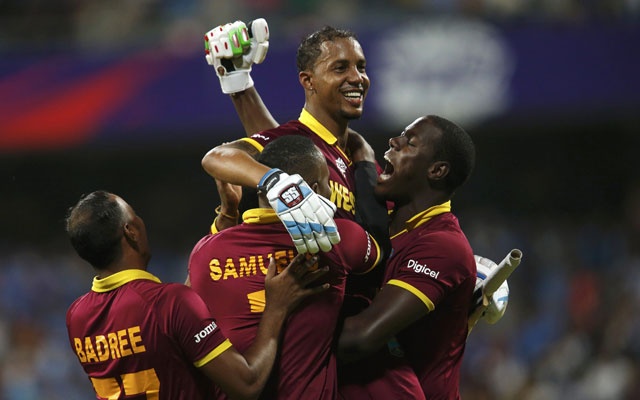 Simmons was caught three times at the Wankhede Stadium but made the most of his fortunate reprieves to help West Indies set up a final against England on Sunday.

On 18 and 50 he escaped after the bowlers had overstepped for no-balls.

The 31-year-old also had luck on his side on 68 when Ravindra Jadeja snapped him up on the boundary but stepped on the rope as he lobbed the ball to Virat Kohli, turning a possible dismissal into a six.

Earlier, Kohli continued his rich vein of form by smashing an undefeated 89 to guide India to 192 for two after they were put in to bat.

West Indies lost the dangerous Chris Gayle and Marlon Samuels early in their reply but opener Johnson Charles kept them in the hunt with a 36-ball 52 and a third-wicket stand of 97 with Simmons.

The right-handed Simmons plays for Mumbai in the Indian Premier League and was only called into the squad two days ago as a replacement for the injured Andre Fletcher.

He cracked seven fours and five sixes in 51 balls and added an unbeaten 80 with Andre Russell for the fourth wicket to take West Indies home with two balls to spare.

Russell, known for his powerful hitting, contributed 43 off 20 deliveries.

“We knew it was a 200 wicket and halfway in the dressing room I kept telling the boys that India are 10 runs short,” said West Indies skipper Darren Sammy, delighted after his team proved they can win without Gayle firing on all cylinders.

“We said this before the tournament that Chris is under pressure, he is our best Twenty20 player but we have 15 match-winners in this side.”

Earlier, the West Indian bowlers began strongly, allowing the home team just six runs in the first couple of overs but India then took control in front of a stadium filled to the brim with fans wearing the team’s blue jersey.

India, the inaugural champions in 2007, dropped under-performing opener Shikhar Dhawan and the move paid off as Rohit Sharma (43) and Ajinkya Rahane (40) put on 62 for the first wicket.

That laid the perfect foundation for Kohli, who led his side into the last four with 82 not out against Australia in the previous match, as he compiled a third unbeaten half-century in the tournament.

Kohli began nervously, twice going close to being run out, but made the opposition pay for failing to take their chances.

He struck 11 fours and a six in his 47-ball knock, putting on 66 for the second wicket with Rahane and an unbroken 64 for the third with captain Mahendra Singh Dhoni (15 not out).

Dhoni said the toss was crucial and the evening dew made it tough for his spinners to grip the ball.

“It was a bad toss to lose,” he added. “That (dew) makes it very difficult for us.

“We also have a history of not doing very well when it comes to the spinners bowling with a wet ball.”