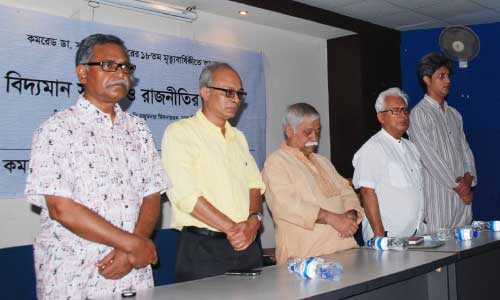 Politicians and intellectuals on Saturday said that the country’s ruling class had thrown the country’s democratic political system and people’s political power into severe crisis.
They made the observation in a discussion on ‘existing crisis and discourse of politics’ organised by Comrade Dr Saif-ud-Dahar Smrity Rakhha Committee at RC Majumder auditorium of Dhaka University to mark Saif’s 18th death anniversary.
Born on January 3, 1921, Saif had made sacrifice for the cause of politics for people throughout his life and was involved in Tebhaga movement in Jessore region in forties and had become a leading left leader in the sub-continent, they said.
An organiser of the country’s Liberation War, the veteran left leader worked for the cause of workers of the country and died on April 14, 1998.
Addressing the discussion, Ganasanghati Andolan chief coordinator Zonayed Saki said that the state was now being run without people’s consent, resulting in a sharp increase of violence by the state.
‘The present crisis is the crisis of security and if we seek security, the government throws people into crisis of independence creating a serious divide in the politics as well as in the society,’ he said.
Dhaka University history professor Ahmed Kamal said that citizens’ political inactivity and ‘shameful’ inattentions of intellectuals and students were intensifying the political crisis.
Control over mass media, rulers’ bid to calm people in the name of development, oppression of women were also matter of concern, he said, calling for a national and international unity to end the crisis.
The National Committee to Protect Oil, Gas, Mineral Resources, Power and Ports member-secretary Anu Muhammad alleged that the country’s ruling class had dependency on the neighbouring country, India.
Besides the present government, the government of the Bangladesh Nationalist Party-led alliance government also had done nothing against the interest of India.
He said that militarization, influence of Indian politics, Indian aggression and worldwide anti-Islam politics were also deepening crisis in Bangladesh.
New Age editor Nurul Kabir described ‘crisis of falsehood’ by the ruling class as the biggest crisis in the country and said that no politically conscious people could believe the ruling classes’ slogans now.
He said that the major political parties that spoke about the spirit of the Liberation War did not act to uphold the spirit.
Equality, social justice and human dignity – for which the country’s people fought for the independence – was yet to be established, he said.
He said that political failure of the ruling classes had created uprising of extremism in different parts of the world.
Smriti Rokhkha Committee convener Shah Atiul Islam chaired the discussion.