As the opposition takes a break from politics, the government tightens its grip 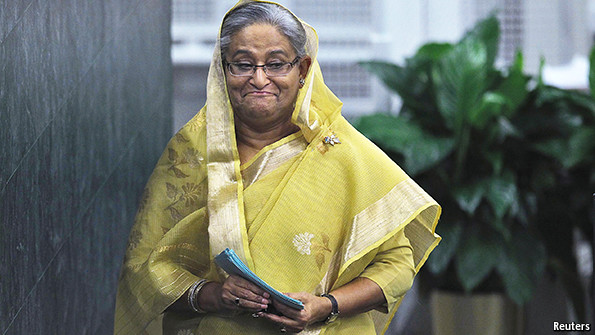 THE Supreme Court of Bangladesh has just rejected appeals by a former prime minister, Khaleda Zia, over the appointment of a judge in a corruption case against her. The ruling clears the way for Mrs Zia to stand trial. Prosecutors accuse her of having siphoned off cash from charitable trusts set up in memory of her late husband, Ziaur Rahman, who was an army leader at independence and was later assassinated as president. If found guilty, the country’s second-most-powerful woman could face time in jail.

The court ruling reinforces the dominance enjoyed by the country’s most powerful woman, Sheikh Hasina, the prime minister (pictured above). It comes eight months after she won an unprecedented second term in an election boycotted by Mrs Zia’s Bangladesh Nationalist Party (BNP). Sheikh Hasina had put Mrs Zia under house arrest and barred the BNP’s electoral ally, Jamaat-e-Islami, from running. With no opposition, it was a shoo-in for Sheikh Hasina’s Awami League.

After a nervous start and amid calls for fresh polls, her government has hit its stride. Some sympathisers argue that Sheikh Hasina’s rule is justified, if only because of her success in developing the economy. Poverty has fallen rapidly since her return to power in 2009. The economy is now twice as big as when the kleptocratic and incompetent rule of Mrs Zia’s government ended in 2006—the moment the army locked up both battling begums.

After its coup, the army discovered that governing was less enjoyable than it had imagined. It has since taken a back seat. It earns a handy $500m a year from its UN peacekeeping missions, the arms budget has grown nicely, and new additions to the army’s business portfolio include yet another luxury hotel as well as a cattle ranch.

At the same time, Sheikh Hasina’s government has continued to capture the courts, silence media critics and tinker with the constitution to perpetuate its rule. It has a two-thirds majority in Parliament, and its ally, the Jatiya Party of a former dictator, Mohammad Ershad, acts as the loyal opposition. On September 17th Parliament passed a constitutional amendment to give it the authority to fire judges.

The BNP has little choice but to wait until the next general election, which need not take place until 2019. Its claim that the Awami League is imploding is wishful thinking. Although the economy has recently slowed, the banking sector is in bad shape and law and order is shaky, no full-blown crisis is in sight.

In some respects, the government has been shrewd. It has kept pending long-overdue verdicts by a controversial tribunal set up to look at charges of genocide and other crimes committed during Bangladesh’s war of independence from Pakistan. Almost all those charged are members of Jamaat-e-Islami. On September 17th the Supreme Court commuted a death sentence for Delwar Hossain Sayedee, a Jamaat leader. Mr Sayedee’s sentencing for war crimes last year triggered a wave of fatal street unrest. This latest ruling, along with, in effect, a suspension of the war-crimes trials, hints that they have outlived their usefulness as a political tool.

Perhaps surprisingly, the government is now considerably more popular than it was before the election, according to a recent opinion poll. The BNP says the poll is flawed; the party points out that it defeated the Awami League in mayoral elections last year (while accusing it of rigging local-government elections this year). Perhaps the opinion poll reflects a sense of fatalism: why flay the government when the opposition is not, for now, an alternative?

How the BNP climbs back into contention will remain unclear for some time. Out of parliament, its politicians rely on thugs for personal protection that was once provided by the state. Flanked by advisers who were once close to her husband, Mrs Zia insists that boycotting the general election was the right thing to do. She suggests that party reform is in the works and that her son, Tarique Rahman, in exile in London, will make a political comeback. Mrs Zia declares that she is not interested in revenge—unlike “that lady”.

Although Mr Rahman’s return would inject some younger blood into the party, his elevation would divide the BNP at home and isolate it abroad. In 2008 American diplomats judged in cables leaked by WikiLeaks that “much of what is wrong in Bangladesh can be blamed on Tarique and his cronies”. Mr Rahman’s defenders say that the corruption of which he is widely accused was in fact carried out by those who abused their connections with him.

Not relishing a return of the BNP’s mother-son duo—which, among other things, turned a blind eye to the Islamist fringe—foreign governments are content to do business with Sheikh Hasina. India’s prime minister, Narendra Modi, has nothing like the close ties with Sheikh Hasina that were forged by the Gandhi dynasts of the country’s recently defeated Congress party. Still, he is keen for relations with Bangladesh to be solid, emphasising economic ties and a common front against Islamist militants. China has submitted an open-ended offer of aid so long as it gets a seaport. Japan has just pledged $6 billion in loans. Russia and Bangladesh are conducting a feasibility study for two nuclear power plants—though doubts exist about whether they will ever be built. Foreigners have put in bids to launch a Bangladeshi satellite, to be named after the prime minister’s father and the country’s founding president, Sheikh Mujibur Rahman.

All, in other words, is set fair for Sheikh Hasina, despite a deeply flawed election. Without an effective opposition, she is under little pressure. Only if the prime minister feels that winning a third straight term in 2019 looks unlikely might she call an early poll in the hope of prolonging her dynasty’s rule. One begum is winning the endless battle—for the time being.

Hefazat to enforce nonstop hartal if 25-org shutdown not lifted