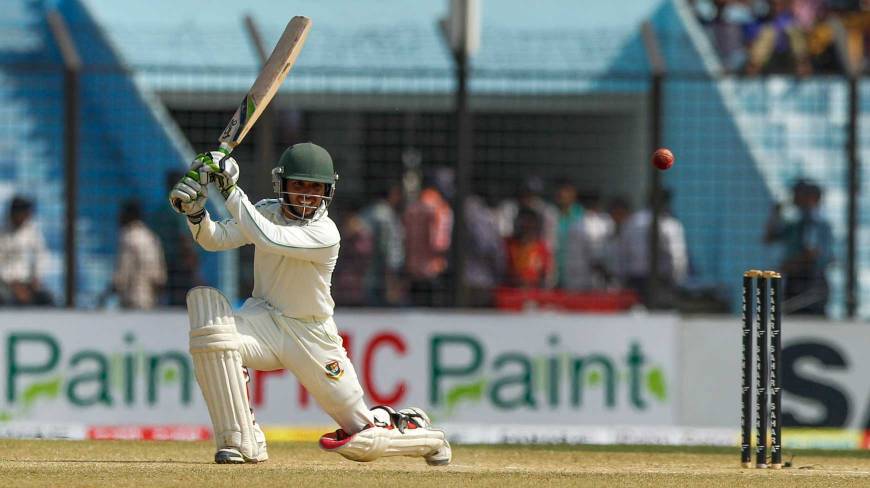 Survival was the order of the final day for Bangladesh and the home side rode on a calm century from Mominul Haque to accomplish the feat and draw the second Test against Sri Lanka yesterday. However, the result hardly mattered as the visitors, who won the first match, strolled to a 1-0 win in the two-match Test series.

467 to win on the final day at the Zahur Ahmed Chowdhury Stadium was practically out of the question and in return many feared Bangladesh, given their poor run with the bat, could lose all 10 wickets trying to save the game.

But the little man, Mominul, impressed again. After match saving hundreds in consecutive Tests against New Zealand last year, the left-handed middle-order produced another 100 yesterday which ruined any plans the Sri Lankans had of winning the match.

Bangladesh had 151 on the scorecard when the third wicket, Imrul Kayes, fell and with approximately 40 over left in the day and the batting debacles the Tigers have been experiencing lately, drawing the match looked tricky. But Mominul paired with the country’s leading all-rounder Shakib al Hasan to add an unbeaten 120 runs for the fourth wicket which killed all the doubts.

The defensive approach was clear from the home side which prompted Angelo Mathews to set an attacking field and also lure the batsmen into playing shots. Mominul, who took time and settled in, soon opened up and played some exclusive drives on the off side and he was well past his fifty when the teams took tea.

Shakib also put on an attacking mask after the break as he showed no hesitation in using his feet against the luring deliveries from the Sri Lankan spinners, especially part time leggie Kithuruwan Vithanage. Suddenly the runs were coming easily while the wicket looked a batting paradise. However, Mominul’s century was the only reason from calling the match off as a draw and young prodigy spent few nervy moments in his 90s.

Batting on 98, Mominul took 15 balls, 10 for the last run, before he landed the three figure mark with a glance down to the square leg. The run also made both captains call the match, with an hour left, as a draw, second between the sides, with Bangladesh on 271 for three.

Earlier, the hosts resumed the day with Tamim Iqbal and Shamsur Rahman batting on seven and four respectively and the pair remained cautious in the first hour of the day. Tamim looked focus on staying in the middle, but playing against the turn of leg spinner Vithanage cost him his wicket. Trying to force a drive on the off-side the ball pierced the bat and pad gap to clean up the local boy on 31 and hand the part timer his maiden Test wicket.

Bangladesh hoped for another big partnership from Shamsur and Imrul, the two centurions from the first innings, but an inside edge rolled on to the stumps to end Shamsur’s run on 45. The danger was seen off as Mominul joined Imrul to put on 71 runs before the latter was trapped plumb in front off Dilruwan Perera.

Sri Lankan batting maestro Kumar Sangakkara without any doubt was adjudged as the man of the match while 499 runs in two Tests also saw him bag the series award.