Number of accused shows a decline for several years after 2005 JMB rise; police prepare database of over 4,000 terror suspects, militants of different outfits 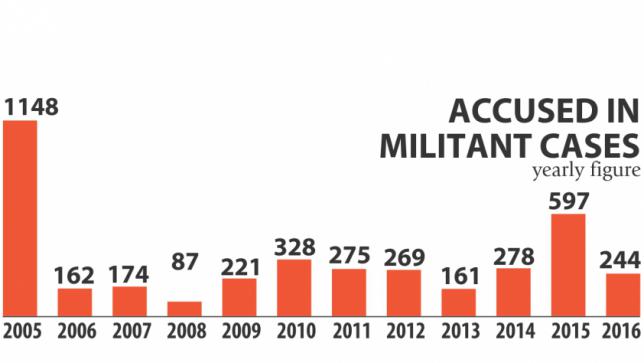 The country saw a phenomenal rise in militancy last year when the number of accused militants was the highest after 2005, another year severely plagued by Islamist extremism.

The police record shows 597 persons were sued for terror links last year when at least 25 people were killed in 26 targeted attacks by suspected militants.

2015 would go down as a dark year also for the murder of an Italian NGO worker, a Japanese citizen, an attack on an Italian priest, a blast at an Ashura procession of Shia community and a suicide attack on an Ahmadiyya mosque, among other incidents.

Ansar Al Islam, which is said to be the Bangladesh chapter of al-Qaeda in Indian Subcontinent, and global terror group Islamic State reportedly claimed credit for the attacks, while the government said those were acts of home-grown militants, especially JMB.

On August 17, 2005, banned militant group Jama’atul Mujahideen Bangladesh (JMB) blasted at least 459 time bombs simultaneously across the country — in 63 out of the 64 districts.

On November 29 the same year, a suicide bomber walked into the office on the ground floor of the Hall Building-2 at the Gazipur court and detonated the bomb strapped to his body. The bombing was apparently a part of JMB’s attack on the judiciary.

That year, as many as 1,148 persons were accused in terror cases, according to a new database prepared by the police headquarters.

From 2010, the number of accused in militancy cases started to rise although different law enforcing agencies had claimed massive success in curbing militancy.

Launched on Tuesday, the database came in the wake of deadly terror attacks at a Gulshan café and near the historic Sholakia Eidgah in July and the prime minister’s apprehension of more such incidents.

It contains names of 4,129 convicted, charge-sheeted and suspected militants.

Monirul Islam, chief of Counterterrorism and Transnational Crime Unit of Dhaka Metropolitan Police, said, “The number of arrest is increasing after a faction of JMB has become active. Besides, there has been a rise in militancy globally.”

Some operatives broke away from the JMB led by its arrested chief Mawlana Saidur Rahman and formed “New JMB”, law enforcers say.

Inspired by the ideology of Islamic State, the JMB offshoot has carried out targeted killings in recent years. Its targets include Hindus, Christians, Buddhists or people from Bahá’í faith, spiritual leaders, members of Shia sect, university teachers and religious converts and foreigners.

Both the new radical groups have built an extensive network that went relatively unnoticed until late last year.

A US report in early June said although the number of terrorist attacks around the world declined last year, terror incidents went up significantly in Bangladesh.

“In 2015, Bangladesh experienced an increase in terrorist attacks … and for the first time, transnational groups have claimed responsibility for these attacks,” according to US Country Report on Terrorism 2015.

The police headquarters for the first time prepared such a database and shared it with different law enforcement and intelligence units to go all out against militants.

Officials who prepared the database said around 1,500 of the 4,129 on the list are now in jail, while the rest are either fugitive or out of prisons on bail.

“We also included names that came up in the lists of militants prepared by different police and intelligence units,” said a top official at the police headquarters, wishing not to be named.

Apart from leaders and workers of banned militant outfits, members of 10 other organisations that are       suspected to have militant links and under watch of law enforcers       have been listed in the database, he added.

It contains names of 120 persons from Allahar Dal, eight from Al Mujahideen of Bangladesh, 20 from Ansar Al Islam, 135 from Ansarullah Bangla Team, 36 from Hamza Brigade and 71 from Hizb-ut Tahrir.

Besides, 41 are involved with Jamaat-Shibir, five with Jama’atul Arakan, three from Lashkar-e Taiba, 11 with Shahdat-e-Al Hiqma, 22 from Kalemar Dawat, one each from Jadid al Qaeda and Jaish-e-Mohammed. The rest 36 are involved with different other groups.

Jama’atul Arakan, Lashkar-e Taiba, and Jaish-e-Mohammed are respectively based in Myanmar’s Arakan, India and Pakistan.

Jadid al-Qaeda, Shahadat-e-Al Hikma and Kalemar Dawat are little known as their operations have not been reported for a long time.

Jadid al-Qaeda came under police radar first when it detonated several bombs at three railway stations in Dhaka’s Kamalapur, Chittagong and Sylhet in May 2007.

However, its name didn’t come up in connection with any other activities after that year.

In the database, 1,345 convicted and suspected militants are from the   DMP area and 549 from Rajshahi Range.

Dhaka Range has the third highest number with 511. Rangpur Range is fourth with 357 and Chittagong Range is the fifth with 285.

The northern region, under which Rajshahi and Rangpur ranges are, has all along been considered a hotbed of JMB.

Recently, at the quarterly crime conference, the SPs and police chiefs of metropolitan cities and ranges were handed over CDs containing names of suspected and convicted militants from their areas.

“We hope this comprehensive database that we have prepared for the first time will help fight militants,” said a top official wishing anonymity.