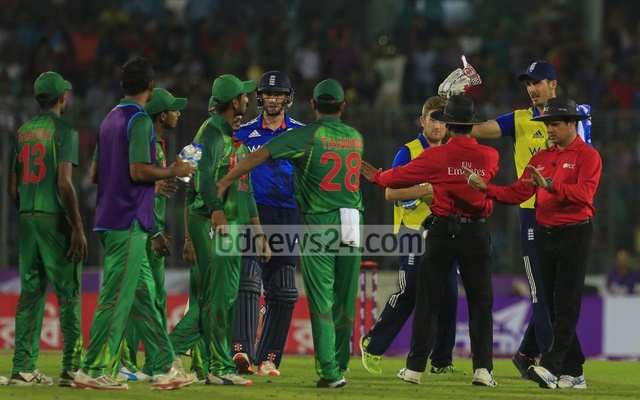 Bangladesh’s Mashrafe Bin Mortaza and Sabbir Rahman have been slapped with fines and England skipper Jos Buttler has been officially reprimanded over throwing tantrums in the second ODI.

The Tigers skipper and allrounder were each fined twenty percent of their match fee while all three charged were handed a demerit point apiece for Sunday’s incident, which took place after the dismissal of the England captain.

It was the 28th over of England’s 239 chase under the lights. Buttler was single-handedly manning the tourists’ resistance when he was rapped on the pad by Taskin Ahmed, which sparked a loud appeal from the fielders.

The umpire turned them down but Mashrafe went for the review. The overrule on review was unarguable and triggered wild celebrations among the home team.

Buttler – under the pressure of the situation in front of the raucous home crowd made worse by the humid conditions and goading – lost his cool and engaged in a heated exchange with some of the fielders.

An ICC statement on Monday said, “Both the Bangladesh players were found to have breached Article 2.1.7 of the ICC Code of Conduct for Players and Player Support Personnel, which relates to ‘using language, actions or gestures which disparage or which could provoke an aggressive reaction from a batsman upon his/her dismissal during an international match’…

“…Buttler was guilty of violating Article 2.1.4, which deals with ‘using language or a gesture that is obscene, offensive or insulting during an international match’.

“In accordance with Article 7.3 of the revised Code, which came into effect on 22 September, in addition to the sanction imposed for their breaches, one demerit point each has been added to the disciplinary records of the three players,” the statement added.

Mashrafe and Sabbir’s reaction was described as ‘overreactions’ while Buttler responded ‘by making inappropriate comments.’

The three players admitted the offences and accepted the sanctions proposed by match referee Javagal Srinath, so there was no need for a formal hearing.

“The Bangladesh players overstepped in their celebration of Jos Buttler’s wicket, which prompted an inappropriate reaction from the dismissed batsman and required the on-field umpires’ intervention,” Srinath said in a statement.

“We all want to see high intensity on the field of play, but only as long as it is not provoking or antagonising or disrespecting the opponent.”

The two captains were slapped with their first demerit point since the new rule was put in effect, but Sabbir now has three points accumulated with the two he received for breaching the code of conduct last month in the series against Afghanistan.

Under the new system, four or more demerit points in 24 months will weigh as two suspension points, at least, and ban a player from either a Test or two ODIs or two T20Is, whichever comes first.