Bangladesh batsman Mahmudullah raises his bat after reaching his half century on the fifth and final day of their second Test against New Zealand in Wellington on Tuesday.— AFP photo

Bangladesh’s stand-in Test skipper Mahmudullah termed the lack of commitment and indecision of the batsmen as the main reason behind their second successive innings defeat in the second Test at the hands of New Zealand in Wellington on Tuesday.
‘We were not committed enough. We were in two minds whether to play a shot or not,’ Mahmudullah told reporters when asked about the reason behind their failure after the end of the second Test in Wellington.
Bangladesh resumed their second innings on the fifth day of the rain-hit Test on 80-3, still trailing New Zealand by 141 runs in the first innings.
Bangladeshi batsmen needed to display tremendous courage and patience to withstand a lethal New Zealand pace attack on the final day if they were to salvage a draw from the match.
But Kiwi pacer Neil Wagner didn’t allow so, dismantling the Bangladesh batting line-up with his short-pitch bowling, taking five of the remaining seven wickets on the final day to inflict an innings and 12-run defeat and end the contest in the morning session.
Wagner had also taken four crucial wickets in the first innings to hold back Bangladesh after a promising start by their top-order.
Mahmudullah, who played a counter-attacking 67 off 69 balls in the second innings before becoming a victim of Wagner, regretted their failure in both innings to negotiate the left-arm pacer.
‘We were stuck in two minds. In the first innings Tamim [Iqbal] and Shadman [Islam] gave us a good start. [Neil] Wagner attacked us with bouncers, but we negotiated him well. But later we failed to capitalise on it,’ he said.
‘We needed to be braver and bat for a longer period of time. Most of the batsmen played careless strokes,’ he added.
Mahmudullah rued the dropped chances of Taylor early on his innings and deemed that the scenario could’ve been much different had himself and Shadman hung on to the chances of Abu Jayed’s bowling early on day four.
Taylor, who was batting on 20 at that time, gave a catch to Mahmudullah at short cover in the first ball of the 14th over and another one to Shadman at slips just one ball later, but both of them grassed the chances.
Taylor went on to score a double ton and help New Zealand declare their second innings on 432-6.
‘I dropped a catch, another one was dropped at slip. If that catch was taken, things could have been very different,’ he said.
However, Mahmudullah saw a silver lining in the bowling department in the second Test but felt their economy rates were too high for them to be effective.
‘Abu Jayed, Mustafizur [Rahman] and Taijul [Islam] bowled well but gave five runs per over. So, we need to focus to bowl better in our final match.’
The third and final Test will commence from Saturday in Christchurch. 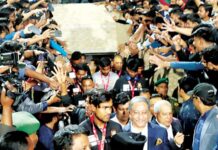 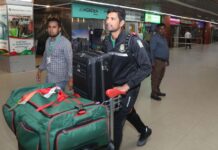