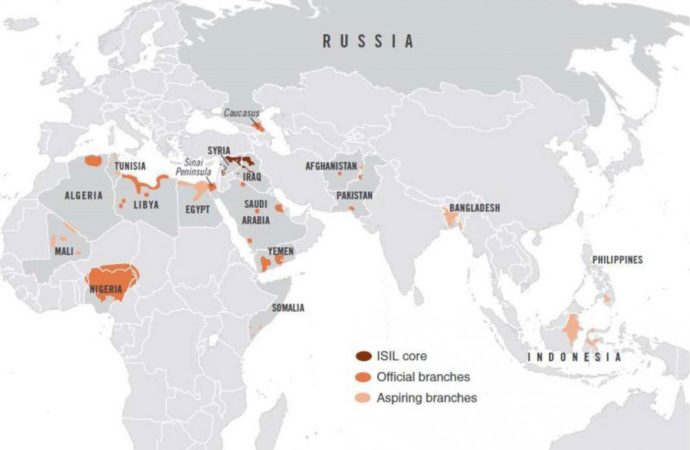 A recent classified document of the United States State Department shows Bangladesh as a growing hub of the Islamic State, NBC has reported.

A counterterrorism ‘Heat Map,’ as it is called, shows six countries as ‘aspiring branches’ of IS which includes Bangladesh besides Egypt, Indonesia, Mali, the Philippines and Somalia.

Obtained by the NBC, the heat map also indicates a sharp rise in IS presence across the world since 2014 when State Department documents indicated IS operations in seven countries.

The heat map is part of a classified briefing document for the White House dated “August 2016” and prepared by the National Counterterrorism Center. It shows IS operations in 18 countries.

Bangladesh has witnessed attacks by Islamist militants claiming to have pledged allegiance to IS in recent times. A terrorist attack at a Gulshan restaurant saw 20 hostages executed and two policemen killed. The 12-hour standoff ended with a commando operation on July 2.

Pictures of the five terrorists smiling with their semiautomatic weapons clad in black and sporting red chequered keffiyehs were released by IS as well as pictures of mangled bodies from Holey Artisan, the Gulshan restaurant several hours before the commando operation took place.

A few days later on July 7, the day of Eid ul Fitr, two more policemen and a woman were killed by terrorists near the largest Eid congregation of Bangladesh.

However, the authorities have insisted there is no IS presence in Bangladesh and that the terrorists are ‘homegrown’ linked with such outfits as the banned Jamaatul Mujahideen Bangladesh.

The uncertainty of Modi