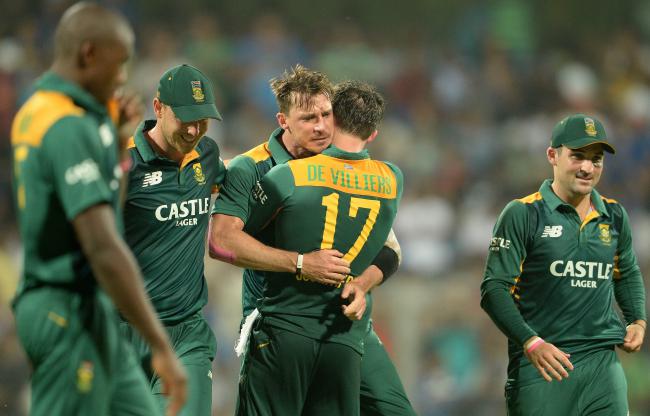 South Africa clinched their first bilateral one-day international series victory against India, defeating the hosts in a one-sided match in Mumbai on Sunday.

In the fifth ODI, the Proteas dealt the biggest ODI blow to the Indians who conceded a 214-run defeat, the worst at home and second worst overall.
South Africans every time made a dramatic turnaround in the series which was marked by see-saw: win-loss-win-loss-win.
Coming to the match at 2-2 level, three South African batsmen – Q de Kock, Faf du Plessis and AB de Villiers – made hundreds equalling their own record earlier this year.
Captain de Villiers is the man who has been involved in building both the 400-plus innings.
Winning the toss in hot and humid conditions at Wankhede stadium, the Proteas posted the second highest total of their ODI history – 438 runs – only one short of the highest innings total against India in 2015. De Villiers blasted 119 off 61 balls, de Kock hit 109 from 87 balls and du Plessis made 133 off 115 balls.
The innings score was the highest ever total on Indian soil.
Under pressure, most Indian batsmen got out cheaply, except some fight from Ajinka Rahane (87) and Shikhar Dhawan (60).
Even after losing two early wickets, India were 155 for two and lost last eight wickets in 69 runs. The hosts were bowled out for 224 runs.
Young pacer Rabada captured four wickets, Dale Steyn got three and spinner Imran Tahir picked two wickets.
AFP reports: De Kock was first to take advantage of a favourable pitch and some woeful Indian bowling to notch his eighth one-day century and his second of the series off 87 balls.
The 22-year-old put together a formidable partnership with du Plessis, who came on after Hashim Amla was caught for 23, as the batsmen combined for a second-wicket stand of 154 runs.
De Kock’s dismissal failed to faze du Plessis, who then combined with captain AB de Villiers to make the most of a lacklustre and extremely generous Indian bowling display during the day-night match.
Right-hander du Plessis and his skipper took it in turns to smash sixes all over the ground.
Du Plessis hit six sixes and nine fours, even reaching a couple of boundaries while hobbling on one leg, and could have had many more if he had not been forced to retire with cramp.
De Villiers, 31, was a man on a mission, racing to 119 off only 61 balls, for his third century of the series.
He hit three fours and an astonishing 11 sixes before being caught behind by Mahendra Singh Dhoni off Bhuvneshwar Kumar.
India’s bowling figures made grim reading, with Kumar giving away 106 runs for just one wicket and Sharma conceding 84 for his one.
The hosts needed a miracle with the bat, but got off to the worst possible start when opener Rohit Sharma was caught on 16 and Kohli went for only seven.
Shikhar Dawan and Ajinkya Rahane put on a spirited show under the floodlights, notching 60 and 87 respectively, but South Africa’s total was never in danger.
The one-day series will be followed by four Test matches. South Africa will be seeking a clean sweep, having won the earlier Twenty20 series 2-0.

Mashrafee among veterans in WC