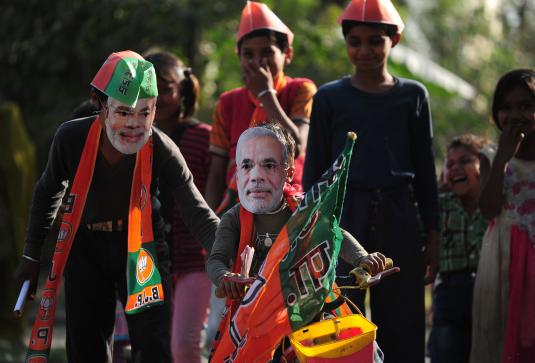 It is ballot time for five Indian States to elect Legislative Assemblies. Elections are being held in Punjab, Goa, Uttarakhand, Uttar Pradesh and Manipur. Voting started from February 4, 2017 and will be completed in phases on March 8. The results will be declared on March 11. Voting has already been completed in Goa and Punjab. The seven-phase election in the largest state Uttar Pradesh (UP) with 13.8 crore voters began on February 11 and will conclude on March 8.

All eyes are focused on the most populous (20 crores) but backward Uttar Pradesh, which has 403 seats and is considered the most important state in India. In the 2014 general elections BJP secured 71 seats out of 80, highest number of Lok Sabha seats in any state.

Interestingly, out of 14 Indian Prime Ministers so far, 9 were elected from different constituencies of UP, including Narendra Modi from Varanasi constituency. Indeed, the political discourse of UP has considerable bearing on national power politics. They say that the road to Delhi goes through Uttar Pradesh.

Several issues are at play during this election. Caste and religious diversity of the state is so unique that they play a vital role as vote banks during elections. It has 40 percent “Other Backward Communities” (OBCs); Dalits (untouchables) 21 percent; forwards castes (upper caste Hindus) 22 percent; Muslims 19 percent; and Christians 0.18 percent. The three main parties in the fray will polarise and exploit the three communities — OBCs, Dalits and Muslims — as vote banks as has happened in past elections.

Elections issues that have come up during campaigns by different parties are – Modi’s demonetisation; corruption; law-and order; development, riots in Muzaffarnagar, Babri mosque; and the anti-incumbency factor. And then the drama related to the family feud within Mulayam Singh Yadav’s family involving Akhilesh and other family members holding important official positions.

During the state elections in 2015 and 2016 despite riding a popularity wave BJP did not do well. In 2015 BJP lost Delhi to Arvind Kejriwal’s Aam Aadmi Party and Bihar to Nitish Kumar’s Janata Dal coalition. The year 2016 was also depressing for the BJP. It lost Tamil Nadu to Jayalalitha’s AIADMK, West Bengal to Mamata Banerjee’s TMC, Kerala to CPI(M), and Puducherry to Congress. Only in Assam BJP gained majority to form government. Understandably, BJP party stalwarts like President Amit Shah, Prime Minister Modi, Rajnath Singh, Monohar Parrikar, etc have been campaigning hard to dislodge the incumbent Samajwadi Party.

The once mighty Congress, which is facing increasing irrelevance, also fared badly in 2015 and 2016 in State elections, not to mention the 2014 Lok Sabha elections when it was decimated. Congress-led governments now control only seven minor states. Party VP Rahul Gandhi elected from Amethi of UP has stationed himself in Lucknow to revive the party’s fortunes. He entered into a coalition with SP to stave off BJP onslaught.

Thus the stage is set for a triangular battle for ballots – BJP, SP-Congress coalition and BSP. Mayawati, representing mainly the OBCs and Dalits, wants to return from political wilderness. SP and BSP have alternated in power over the past two decades.

Akhilesh Yadav’s revolt against his father was a boon for him, as he took over the leadership of the party bringing a generational shift in its politics, enhancing his reputation as a capable forthright leader. Many used to call him “half CM” as he was under the shadows of his elder in the party. Despite Akhilesh’s rebellion the party is intact as Mulayam Singh has fallen in line and has been campaigning for his son. All anti-incumbency issues were blamed on Mulayam and uncle Shivpal. Akhilesh’s clean image and soft demeanour appear to have endeared him with his voters. His tie-up with Rahul Gandhi has given the SP-Congress a catchy slogan “UP keladke” (the boys of UP) portraying them as the young generation leaders of India.

In campaign rallies party leaders have been making scathing attacks on one another. Akhilesh-Rahul combine, seeking to win over 300 seats, have campaigned together and have laid out a Common Minimum Programme, with lucrative promises. BJP’s Amit Shah described them as — “two shezadas one (Akhilesh) troubling the father and another (Rahul) troubling the mother (Sonia Gandhi)”.

In Punjab the narrative is discouraging for the incumbent Shiromani Akali Dal (SAD) — BJP coalition. SAD-BJP combine led by the octogenarian CM Prakash Singh Badal (89) has ruled the state for the last decade faces strong anti-incumbency factor. Arvind Kejriwal’s AAP is seriously challenging both Congress and SAD. According to some reports AAP can get more than 90 of the 117 seats of the Assembly. Opinion polls in Goa suggest that AAP will get 14 seats, followed by BJP with 11 and Congress with 7 seats in the 40-seat Assembly.

BJP’s popularity has come under scrutiny in these elections after Modi’s controversial demonetisation gamble, which badly affected every segment of the people. Modi badly needs BJP victory in UP and Punjab not only to increase its number in the Rajya Sabha, where it is currently a minority, but also to get his own President. President Pranab Mukherjee will complete his tenure in July 2017. The President is elected by a combination of elected members of the Lok Sabha and State Assemblies.

Uttar Pradesh election is crucial as none of the three parties can afford to lose. If Akhilesh loses, SP will split, and Congress’s existence will be at stake. If BJP loses it will mean that Modi’s “Hindutva” has failed.

It will be interesting to watch the role of regional parties and their power in Indian politics. Indeed, the current battle for ballots is a quasi-referendum on Modi’s “Achhey Din”.

The writer is a former Ambassador and Secretary.

Is Bangladesh’s Crisis About to Get Much Worse?

Lesson from the equitable award of UN PCA

Of Ban Ki-moon and capital punishment