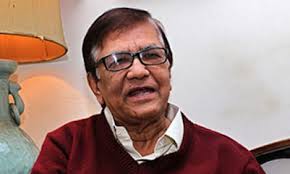 “A crisis of democracy has been created in the country. The incumbent government buried democracy through 10th parliamentary polls,” the BNP leader said addressing a protest rally at the Jatiya Press Club.

Mahbub said all will have to come forward to save democracy as the development of politics and economy depend on it.

Pointing at BNP leaders and activists, Mahbub said, “We’re not upset over the movement. We’ve not lost our morale. We won’t get upset, no matter how difficult time comes.”

BNP had wanted a free and fair election through the movement, he said adding, but the 10th parliamentary elections were one-sided ones. “It was a voter-less election. Awami League came to power through a false election. Hence, the present parliament is a blunt parliament.”

Mahbub said their movement before the January 5 polls was successful. “We hope this parliament will end its tenure within a short time.”

He alleged that the current government established a reign of terror throughout the country by restoring to killings of the opposition leaders and activists and making them disappeared.

Fakhrul, 2 others get bail in vandalism case