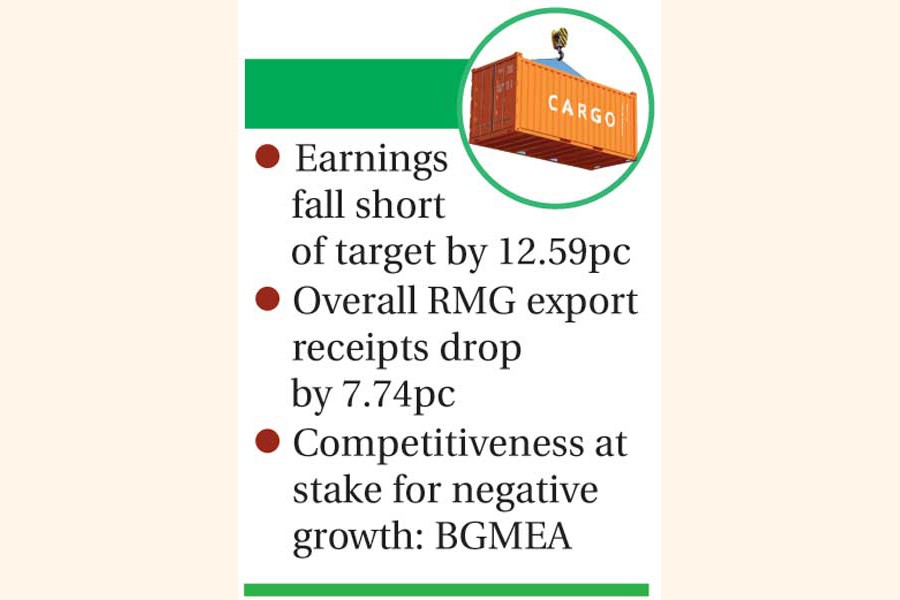 Merchandise exports continue to see a downtrend as overseas earnings have fallen by 7.59 per cent in the past five months of this fiscal than last year’s.

According to the Export Promotion Bureau (EPB) data revealed on Thursday, total earnings also fell short of target by 12.59 per cent set for the period.

The November earnings also fell short of target by 17.90 per cent.

Exporters and officials have attributed this fall in the export value of apparel items to a drop in export receipts during the period under review.

Overall export earnings from RMG items-both knitwear and woven garments-have fallen by 7.74 per cent in the first five months of this fiscal.

Earnings from woven garments fell by 8.74 per cent to $6.07 billion in the five months of this fiscal than last fiscal’s, EPB figures show.

Proceeds from knitwear item exports during the period also fell by 6.79 per cent to nearly $6.80 billion.

Woven and knitwear fetched $6.88 billion and $7.30 billion respectively in the same period of last fiscal.

Earnings from other key sectors also fell largely during the period under review than last fiscal’s.

Earnings from home textiles also fell short of target by 15.51 per cent.

When asked, Bangladesh Garment Manufacturers and Exporters Association president Dr Rubana Huq said RMG export fell by 11.98 per cent in November as the fourth out of five consecutive months.

Such continuous negative growth was recorded during March to June of FY 2011-12.

Negative growth shows the sector’s competitiveness at stake at a time when strategic growth for this fiscal has been set at 11.91 per cent, Ms Huq cited.

“We are not aligned at all with the global competitive scenario. The exchange rate movement of taka against competitor currencies still remains inconsistent.”

Moreover, factory closures over the recent months after the new minimum wage hike are taking a heavy toll on exports and industry, she argued.

Citing data, the business leader said, Bangladesh is significantly lagging behind its competitors in terms of growth in the third quarter of 2019.

The picture in Europe is not much different as Bangladesh has seen only 0.90-per cent growth during the quarter in question.

She demanded quick fixation of exchange rate premium on the local retention of RMG export and untangling the complexities in cash incentive.

The BGMEA chief argued that the industry needs to rethink the business model toward diversification from basic to mid/high price segment, and from cotton to non-cotton items, especially for womenswear.

According to the EPB data, earnings from leather and leather goods export fell by 10.03 per cent to $391.09 million during the July-November period.

Frozen and live fish exports fetched $235.11 million in the first five months of this fiscal, registering 7.62 per cent negative growth than that of last fiscal.

Pharmaceuticals exports grew by 2.94 per cent to $59.49 million in the same period, according to EPB data.

Bangladesh fetched $40.53 billion from goods exports in last fiscal out of which, some $34.13 billion came from the RMG exports, the data shows.