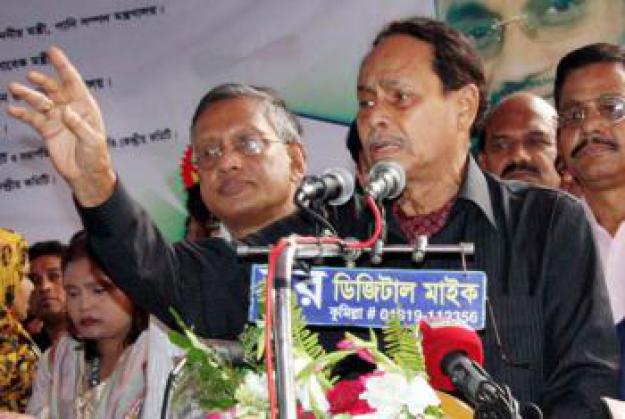 The BNP is now in a coffin and the last nail on the coffin will be put when Khaleda Zia is sent to prison, Jatiya Party Chairman Hussain Mohammad Ershad has said.

“Before one-eleven, Khaleda Zia told a rally in Mymensingh that jail would be Ershad’s destination and Ershad will have to come out of jail dead. Khaleda thought she could come to power again. But I am alive. I am waiting eagerly to see who comes out dead,” he told the biennial council of JaPa’s Chittagong city chapter.

Speaking as the chief guest in the programme at the port city’s GEC Convention Centre yesterday, he said: “The people of the country are not at peace. They cannot speak; they have become deaf and dumb. Democracy has been buried 100 feet below the earth. People do not have the right to speak or write; their voices have been gagged.”

Ershad also alleged that the ruling party men were grabbing lands of the minority people who voted the government to power.

“The Hindu people are leaving the country. In the past, the country’s population consisted of 10% Hindus but now the figure has come down to a meagre 6%,” he said.

Urging the Hindus not to leave the country, the former president said: “The day is not far-off when Jatiya Party will assume power again. Please wait for that day to come.”

Referring to the political repression inflicted on him, Ershad said: “I am still accused in so many cases. I do not believe in any shackles. Now I am in chains. But I will definitely shake off the shackles one day.”