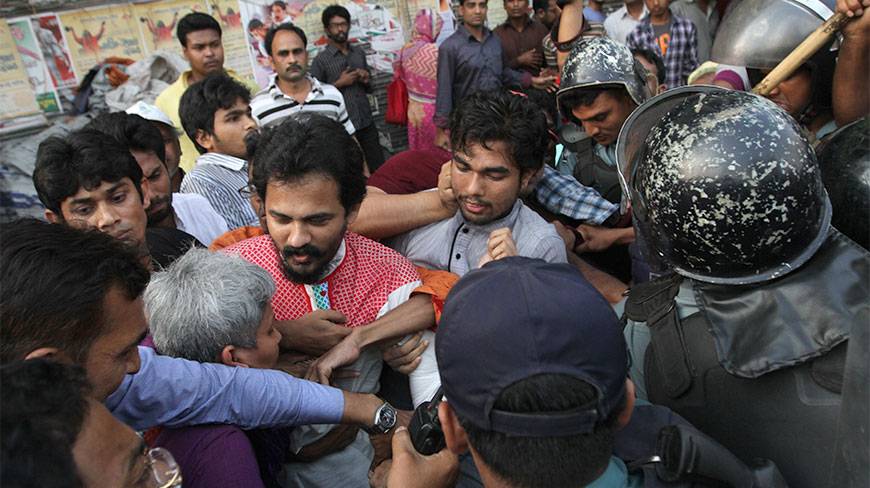 For Imran H Sarkar, it’s a lost battle. A formal end to his reign in an invisible empire based in Shahbagh since February 2013 is now in sight. The lacklustre media coverage of splits within Gonojagoron Moncho only succeeds to show the twilight of Sarkar’s movement.

It’s high time that both those who supported and opposed the Shahbagh protest rallies that began with the demand for capital punishment for war criminals of 1971, agreed to raise some cogent issues, no matter how unpalatable they may seem. Of course, the ones who had difference of opinion, or those who had no political position on the moncho can speak out without the risk of being bracketed as Razakars or atheists.

It is being said that the moncho has lost its relevance to the ruling camp. Jamaat leader Quader Mollah has been executed and the Awami League has returned to power, feeling ensconced and secure at the moment. But what is done is done. Finished!

This politics can be summed up by one coinage – ad hoc-ism – which suits our interests and activities. Many of our unique ideas such as the Gonojagoron Moncho or the platform for mass awakening disappear into political rhetoric devoid of any popular appeal. The AL might not have initiated this platform, but the party hijacked the movement within three days by engaging its A and B teams and also local and foreign friends.

Days ago, it had made an entente with Jamaat’s student-wing Shibir, as reflected in a Motijheel rally.

Reversing that position, the AL leaders made a showdown in Gonojagoron Moncho and managed to sideline the opposition BNP from there. Jatiya Sangsad had amended laws in the middle of the war crimes prosecution, following moncho demand. The AL camp also demonstrated its political hypocrisy. Ministers and senior AL leaders lined up at Shahbagh to express solidarity.

The prime minister told parliament that her “heart goes out to them” (Shahbagh protesters).

Exposing double standards, a few hundred people continued to block Dhaka City’s nerve point of Shahbagh causing the public to suffer for months when the opposition parties were not allowed to hold meetings. There were parallel centres of gravity of power. Sheikh Hasina headed the AL government but the moncho spokesperson who bears Sarkar (literally meaning government) in his name, acted as an alternative authority to order the hoisting of national flags.

Even school authorities were asked to send children to Shahbagh. A section of “intellectuals” termed it the second liberation war, instigating the young blood to behave recklessly.

The moncho targeted anyone with a dissenting voice, going to the extent of declaring Bangabir Abdul Kader Siddiqui a Razakar!

Hardly anyone dared to question the sources of funding for Sarkar and his comrades, or if it was the prerogative of the moncho to demand the closure of financial institutions. The Ruposhi Bangla Hotel and flower traders had to incur losses. And the woes of patients in nearby hospitals were secondary. In the face of something so momentous, what is the suffering of a few thousand?

The repercussions of such extremist acts was obvious: The rise of the Hefazat-e-Islam, the wholesale branding of bloggers present in the Shahbagh demonstration as non-believers, and the eventual depletion plus faltering of the Shahbagh movement.

We witnessed some men and women of the rising middle class families, who initially went to Shahbagh to become part of a “great” demonstration, soon beginning to deny their involvement, lest they were stigmatised or faced cruel jokes. Honestly, you don’t hear too many people boast about being part of it anymore.

A family friend of ours emerged as a “cyber warrior,” volunteering to upload moncho news items round the clock when her baby was left almost helpless at home. About her desertion from the movement, her brother said a few months ago, “the revolution betrayed.” Another friend of mine, who has external orientation, regretted the downfall of the moncho as the death of a “potentially far-reaching social movement.”

All this prompted me to ask what the expectations were from the Shahbagh movement, other than securing the execution of the convicted war criminals.

If it was to be a people’s movement, they should have raised voices against those killing human beings by producing and selling adulterated foods. They neither took a stand against corruption nor did they want jobs for the young and educated.

When asked, some enthusiastic participants of the movement could not articulate their dreams and vision, but Sarkar finally did by expressing willingness to float a political party. Some might have assumed that the Shahbagh demonstration would be a reproduction of the Arab Spring that would, in course, change Bangladesh’s current political climate.

It’s now evident that such assumption lacked an understanding of the dynamics of politics.

Imran H Sarkar, an ambitious newcomer to Dhaka city, was a good choice for a scapegoat. He was used for others to secure their political seats.

Surprisingly, some “intelligent” people ignored the fallacy of the Shahbagh movement. It was named the platform for mass awakening when that was not the case in reality, nor was there any public awareness. It is puzzling how a “mass” movement could be backed and sponsored by the establishment.

So, the miscarriage of the Gonojagoron Moncho was an inevitable consequence. A reactive initiative followed by a series of questionable, exclusionist, and divisive actions had no scope to end up as a constructive outlet.

Why has such gross negligence gone unpunished?

A letter to Shakib Al Hasan

Why we need a policy framework for displaced people

Pakistan: Worse Than We Knew