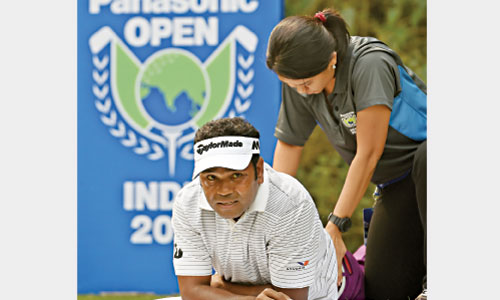 Siddikur Rahman’s bravery could not be translated into a fairy-tale as the Bangladeshi golfer finished as runners-up in the Panasonic Open India at Delhi Golf Club on Sunday with a sore back.
The ace golfer, who felt pain in the lower back on the second hole, continued his play after he had been treated by a physiotherapist in the fourth tee box and gave a hard-run to Chirag Kumar of India, who eventually finished as champion with a 13-under-par 275.
Siddik secured second position jointly with legendary Thai golfer Thaworn Wirtachant, the holder of an unprecedented 18 Asian Tour titles made even-par 72 on the last day to take his aggregate to 10-under-par 278 after four rounds.
The two-time Asian Tour winner and the former champion of the event fired birdies in the sixth, eighth, ninth and 15th holes but hit bogeys in the fourth, seventh, 17th and 18th hole which proved too costly for him.
But the champion golfer of Bangladesh took the matter philosophically and was rather content with the result that he achieved with a difficult physical condition.
‘I thought I wasn’t able to play because I was hurt but the physiotherapist gave me some treatment on the fourth tee box and I felt better’, Siddik was quoted as saying in Asian Tour website.
‘I’m happy that I finished my round. I didn’t put any pressure on myself to do well or win because I could feel the pain in my back. The win didn’t come but it is okay.’
Kumar, the winner of the event appreciated Siddik’s challenge and felt content to overcome that.
‘I always knew that Siddik will be a tough guy to beat especially when he was one-shot behind me. I’m lucky he didn’t get off to a hot start’, said Kumar.
‘It was neck and neck all the way but I kept myself together and played well.’
Another Bangladeshi Golfer, Zamal Hossain Mollah, who started the day at a promising third position in the leaderboard had a horrible day with five-over par 77 to finish the tournament as 23rd with three-under-par 285.
The 27-year old scored two birdies but squandered them with four bogeys and a horrendous triple-bogey in the 16th hole to spoil his first three day’s good work.
Source: New Age