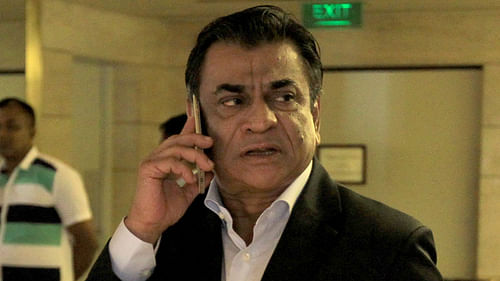 Kazi Salahuddin, gunning for a fourth consecutive term as president of Bangladesh Football Federation (BFF), announced his manifesto Sunday ahead of the election which will take place on 3 October, reports UNB.

Salahuddin’s Sammillita Parishad hosted an event on Sunday at a Dhaka hotel to reveal his manifesto and introduce his panel. Most of the members of the last panel of Salahuddin are still with him while many opted out as well.

Salahuddin, one of the brightest star of the country’s football history, became the president of BFF for the first time back in 2008. He also won the election in 2012 and announced that he will do everything to qualify for the World Cup 2022. But halfway through qualification, this looks as unlikely as ever before. He had formed an initiative named “Vision 2022” which has only bitten the dust during the last eight years.
He is yet to face a strong challenger though, and this has hurt the country’s football development. This time again, following some withdrawals and late surprises, the election is Salahuddin’s to lose, despite an abundance of disappointment over the stalled progress of the game in Bangladesh.

Salahuddin said there was confusion about his Vision 2022. He claimed that he never said that he will work to make sure Bangladesh qualify for Qatar World Cup.

“I think there is confusion among you. I never said that we would qualify for the World Cup in Qatar. We said we would try to qualify. We always have to have a plan along the way,” Salahuddin told the media Sunday.

“We are going to introduce a long-term and sustainable plan for Bangladesh football. If we get elected again, we will take specific actions to improve our position in the world ranking. We will try to become one of the best 150 teams in the world. And at the same time, we will put our best foot forward to make our women’s team one of the best 90 teams in the ranking,” Salahuddin added.

When Salahuddin took charge in 2008, Bangladesh was at 180 in the world ranking while they are now at 187. He tried to justify this situation saying: “Look at France- they are the world champion but not at the top of the ranking. FIFA friendly matches are very important. We had a financial crisis, and so we failed to play many matches.”

In the new manifesto, Salahuddin and his team repeated most of what they had said ahead of the last election. In the last election, there were 25 points in their manifesto. Now they have increased to 36 points.

Salahuddin’s manifesto said they are committing to host Bangabandhu Gold Cup every year and regain the title of SAFF Championship and SA Games. Along with these, they said they are committed to appointing high-profile coaching staff, creating a profile of the players, establishing a regular calendar for domestic events and forming by-laws for the domestic leagues. Salahuddin’s panel also said they will arrange all the facilities at least in four venues to host international games.

One of the longest-serving BFF presidents, Salahuddin, claimed to have completed ‘at least 75 per cent’ of their last manifesto’s commitments.

“We are sorry that we failed to do the rest of the works. But we are saying now is prepared for three months. We have researched a lot. We cannot take our football forward alone. For this, the players, coaches, officials and sponsors all have to work together.”