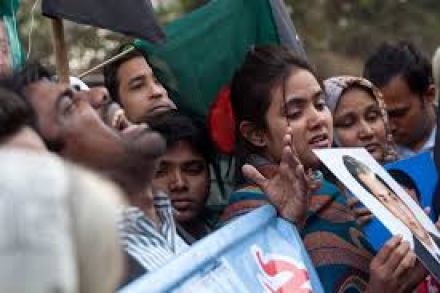 Relatives of victims of missing people in Bangladesh form a human chain outside the press club in Dhaka to call for an end to enforced disappearances, killings and abductions

An ‘Enforced Disappearance’ is defined in international law as an:

“arrest, detention, abduction or any other form of deprivation of liberty by agents of the State…followed by a refusal to acknowledge the deprivation of liberty…which place such a person outside the protection of the law.”In Bangladesh, disappearances result in three different consequences:

This page and others linked to it provide information on the claims made in 2016 by families in Bangladesh that a relative has been picked up by the law enforcement authorities (where the authorities deny that this is the case) and one of the above possible consequences has occurred. It is updated until 20 September 2016

To read about those cases where the person remains disappeared, click here.

Picked up in 2016 and then killed (the most recent, first)

Below are 15 cases reported to the media and to human rights organisations where families have alleged that a relative has been picked by state agencies and – presumably whilst in the secret custody of law enforcement authorities – killed.

These can be divided into 9 of those where the police say that the men were in fact killed in a so called police ‘gunfight’ and 6 where the dead body, often with bullet wounds or with signs of torture, are found.
Out of these 15: – 10 of the men were activists of the Islamist political party, the Jamaat-e-Islami or its student wing – 1 of the men was a post holder in the opposition Bangladesh Nationalist party – 2 of the men were suspected of the murder of the wife of a police officer – 1 man was suspected of being a militant – 1 man is an alleged criminal
(Please note that there are other alleged extra-judicial killing, which do not involve a disappearance, which are not listed here)

Family say he was picked up on 4 August. Dead body found on 12 August
Idris was a teacher of Raghunathpur Hossain Ali Alim Madrassa and competed twice, as a Jamaat-e-Islami nominee in the Raghunathpur Union Parishad elections. His family claim that at about 8 pm on August 4 he was picked up by law enforcement officers as he was returning from his local bazaar on a motorbike. On 9 August, the family held a press conference. Early morning on August 12 the family heard from local people that Idris Ali’s body had been found in the Jorapukur area of Jhenaidah Police said that he had died in a road accident though Idris’s family has alleged that there were many marks of torture on his body.

Family say he was picked up on 9 July. Police say killed in gunfight on the following day

Molla, a supervisor at a garments factory in Dhaka was the General secretary of the Kashimari Union Bangladesh Nationalist Party in Shyamnagar upazila in Satkhira. According to his family, Molla was picked up by law enforcement officials whilst travelling on a bus travelling from Kaliganj in the district of Satkhira back to Dhaka on 9 July. The next thing the family heard was the police claiming that he had been killed in a gunfight near his home. According to the police, at 3.30 am on 10 July, a number of people were speeding through the area on bikes, but when the police asked them to pull over they started to throw bombs and shoot at the police. When the police retaliated, one of the attackers – who was found to be Molla – was found on the ground. According to the police, Mollah had a number of criminal cases lodged against him.

Family say he was picked up on 1 July. Police say killed in gunfight following day.

According to his wife, Mollah who worked as a farmer, was picked up at 11 am on the morning of 1 July by police officers whilst he was cleaning jute fibres in an area close to their home. Police deny this and claim he was a member of a gang of robbers who on the following morning were involved in a gunfight with the police as they tried to stop the gang committing a rover at Kanaitala on Rajarhat-Chuknagar Road in Jessore at around 2:30am.

Family say he was picked up on 1 July. Police say killed in gunfight on 19 July.

Saiful, a final year student of Arabic literature department at the Islamic University, Kushtia, was also an activist of the student wing of the Jamaat-e-Islami. His family claim that plainclothes police officers picked up Saiful from a student mess in Pabahati village in Jhenidah town on July 1. The police deny this and say that he was killed following a gunfight at around 3:00am, when a group of criminals hurled crude bombs at a police van which was patrolling on the Dhaka-Jhenidah highway near Madhupur-Aruakandi graveyard and Saiful was killed in the resulting “gunfight”.

Families say that they were picked up on 23 June. Police say killed in gunfight on 5 July

Both men, Rashed and Md Nabi were suspected by the police of involvement in the murder of a senior police officers’ wife. According to Rashed’s father his son and Nabi were picked up from a mutual friend’s house in Chittagong on June 23. On 2 July, he held a press conference setting out what had happened. The police deny this and say that three days later, on 5 July, they received a tip that the two men were in a particular place and conducted an operation to find them at 3.30 am. The police said that when they reached near MBW Brick field, the two men opened fire on them forcing a gun battle which resulted in the two men being killed.

Family say that he was picked up on April 10. Dead body found on April 20

Sohanur Islam, a student at Shaheed Nur-Ali College in Kaliganj, was an activist of the Jamaat-e-Islami. According to his family, on April 10 four law enforcement officials picked him from Ishwarba village in Kaliganj in Jhenaidah. Ten days later, on April 20, his bullet-ridden dead body was found at Pannatola field, Kharagoda upazila, Chuadanga Sadar.

Family say he was picked up on March 25. Dead body found on 13 April

Shamim Mahmud, a student of Sarkari Keshab Chandra College in Jhenakdah, was an activist of the Kaliganj Pourosova unit Jamaat-e-Islam student wing in Jhenakdah. His family claim that on March 25 at around 5.30 pm four plainclothes men, who identified themselves as being from the administration, picked up Shamim from a furniture shop near Mahtab Uddin Degree College situated close to the Jessore-Dhaka highway. A few days later the family held a press conference. On April 13, his dead body, with bullet wounds, was found near the Bahrampur cremation ground in Jessore Sadar upazila (along with the dead body of Abuzar Girafi, see below)

Abuzar Girafi Family claim that he was picked up on March 18. His dead body was found on 13 April

Giraffe, a student, was president of the Kaliganj Pourosova unit Jamaat-e-Islam student wing in Jhenaidah. According to his family, on March 18, 2016 at around 2:00 pm, Abuzar Girafi, was picked up close to his house by four armed men claiming to be from the Detective Branch (DB) of Police, handcuffed and put on a motorcycle. He had been returning home from a mosque situated 400 yards away after having conducted Friday prayers. On April 13 his dead body, with bullet wounds, was found near the Bahrampur cremation ground in Jessore Sadar upazila (along with the dead body of Shamim Mahmud, see above)

Sharif alias Saleh alias Arif (Mukul Rana) Family say that he was picked up on 23 Feb. Police say he was killed in a gunfight on 19 June
Mukluk Rana’s family say that four days after getting married he was picked up at about 11 am on 23 February from Bashundia intersection in Jessore by 10 to 12 people in a microbus as he was returning home to Satkhira from his in-law’s house in Jessore along with his newlywed wife. The police deny this and say that they had received information about the presence of Mukul, who was suspected of involvement in the killing of the writer Avijit Roy, at Meradia in Dhaka and during the operation to arrest him, three people on a motorcycle sped away from the seance and opened fire on the police who responded. Mukuk died in the gunfight. http://www.thedailystar.net/frontpage/he-was-picked-4-months-ago-1243024
Mohammad Jasim Uddin (24) Family say he was picked up on 12 Feb. His dead body was found on 2 March.
Uddin, a student at Jhenaidah Aliya Madrassa, was the Jamaat-e-Islami student wing president of Ganna union unit in the district. According to his family, on February 12, Uddin was returning home from Sylhet by bus when a group of men who identified themselves as members of the detective branch of the police picked him up. On March 2, 2016 local people found his dead body, with bullet wounds, in a field at Hingerpara village, Horinakundu upazila, Jhenaidah. http://www.thedailystar.net/city/missing-shibir-leaders-bullet-hit-body-found-786493
Abu Huraira (55) Family say he was picked up on 24 Jan. His dead body was found on 29 Feb

Humaira, a teacher at the Kuthi Durgapur Madrassa, was a senior member of Jhenaidah Sadar upazila Jamaat-e-Islam. According to his family, on January 24, some men who identified themselves as being from the detective branch of the police picked Humaira up from the Madrassa where he worked. The police say that they found his dead body on February 29 on the Jessore-Jhenaidah road. http://en.prothom-alo.com/bangladesh/news/96685/Abducted-Jamaat-rokon-found-dead

Govt must shoulder responsibility for any long march anarchy: Khaleda