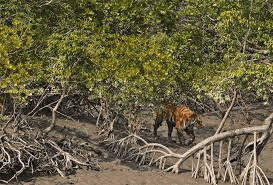 A controversial new coal power plant being built in Bangladesh is already running out of friends. Environmentalists worry it will spell disaster for the world’s largest mangrove forest, while locals worry about pollution and being driven from their homes. The vast majority of Bangladeshis have been critical of the project since its inception in 2010. Even the business case seems to be falling apart, as costs mount and international investors pull out. So why is it still being built?

Rampal, a 1320MW coal power station, will be big enough to provide around 10% of the country’s electricity generation. It’s scheduled to be operational from 2020. The project is owned jointly by Bangladesh and India’s state-owned energy utilities, which each have 15% equity, while the remaining 70% of the total funding is expected to come from bank loans.

The first and most obvious problem with Rampal is its location on the edge of the Sundarbans, a large, dense mangrove forest that straddles the Bangladesh-India border. The forest is a UNESCO world heritage site and hosts endangered species such as river dolphins and Bengal tigers which will see their habitat damaged if the plant becomes a reality.

Environmental groups claim the outer edge of the project is within a 14km radius of the forest, thereby breaking Bangladeshi forest laws. Each year, nearly 5m tonnes of coal will have to be shipped to the plant along the Poshur River, which cuts across the Sundarbans and will need to be dredged. There is a real danger of coal-carrying vehicles scattering large amounts of fly ash, coal dust, sulphur and other toxic chemicals.

Human rights agencies have also raised concerns about the displacement of families and the occupation of land in adjacent areas. Fishermen, woodcutters and honey collectors have already lost their livelihoods as a result of displacement and encroachments onto their lands.

The above concerns are further compounded by the proposed technological and risk management plans. The plant is set to use outdated supercritical (SC) technology, which skips the water-boiling phase of conventional coal-fired generation but has since been superseded by the more modern and efficient “ultra-supercritical” (USC). Contrary to the claims of the Bangladeshi government, this is bound to produce high levels of carbon dioxide and waste-water discharges. It is also likely that Rampal will in fact be run using poor quality coal imported from India, which spits out lots of ash without creating much energy.

A Banktrack report suggests that the project fails to comply with even the minimum environmental and social norms established under the “Equator Principles”, which more than 80 major international financial institutions have signed up to. Consequently foreign banks have shown no interest in financing the project.

Given this, the Indian government arranged financing through its state-owned EXIM Bank at an effective interest rate of 5.2%. That’s much lower than market rates in India. However it’s still not an attractive deal for Bangladesh which could usually get a better rate from one of its “development partners” – richer countries such as Norway or Japan which have built close ties with the country.

Nevertheless, this is not a project in which development partners in Bangladesh are prepared to invest. The Norwegian Pension Fund, for instance, the world’s largest sovereign wealth fund, pulled out citing serious environmental and human rights concerns.

In order to recover the subsidies and costs, the Rampal power plant will require a standard tariff of Tk9.54/kWh (US12.1c/kWh). Environmentalists claim that alternative power sources, such as solar panels, cost much less than this. This tariff may even be an underestimate, given it is based on the plant operating at 85% capacity (when a Chinese coal plant typically operates at 50-60%) and doesn’t account for the coal market. Rampal electricity would become even more costly if coal prices rose.

Rampal faces national and international resistance, and overwhelming financial and environmental concerns. So why are the ruling regime of Bangladesh and the Indian government continuing to push for the project?

Many Bangladeshis are wondering whether the Rampal project will open up markets for low-energy Indian coal, and whether this might be used as a political tool by an Indian government seeking influence in its neighbour. Whatever the consequences for future regional politics, this project will not only cause environmental and human rights disasters, but is also destined to create a financial nightmare for Bangladesh.