Victim claims she was targeted for voting for ‘sheaf of paddy’

A mother of four was gang-raped in Noakhali’s Subarnachar early yesterday allegedly by 10 to 12 Awami League activists.

The 35-year-old woman, who was being treated at Noakhali General Hospital with severe injuries, claimed that she was raped for voting for “sheaf of paddy”, the electoral symbol of the BNP, during Sunday’s national polls.

The woman alleged the rapists were accomplices of Ruhul Amin, a former member of Char Jubilee Union Parishad. “They had repeatedly insisted that I should vote for boat [the AL’s symbol] but I cast my ballot for ‘sheaf of paddy’,” she said.

READ MORE: Rape in Noakhali: Nine sued except ‘who ordered it’

Ruhul denied his involvement in the incident. He said the woman was his relative and they had no “enmity”. “I just met her once at the polling centre.” Asked, he said he was the publicity affairs secretary of the Subarnachar AL.

The woman said soon after midnight yesterday, some 10-12 men carrying sticks entered her home by cutting the surrounding fence. They tied her CNG-run auto-rickshaw driver husband and four children with ropes.

“They took me outside and raped me,” she said, groaning in pain.

She also said the rapists threatened to kill her husband and children and torch their house if she told anyone about the rape.

The victim’s husband, who was also injured, said the criminals left around 4:00am after beating his wife unconscious and taking Tk 40,000, some gold ornaments and other valuables with them.

Soon after the alleged rapists left, the victim’s husband and children cried for help. At this, the neighbours came and rescued them.”

“At first, a village doctor was called. But as she [the victim] was still bleeding, she was taken to Noakhali General Hospital at noon,” said one of the neighbours, wishing anonymity.

Shyamol Kumar Devnath, of the emergency department at the hospital, said they found evidence of rape. There were also injury marks on different parts of the body, he said.

The husband said the victim went to cast her vote at Char Jubilee-14 Government Primary School centre around 11:00am on Sunday. She took the ballot paper from the assistant presiding officer and went to a booth.

During that time, Ruhul, an Awami League man, allegedly insisted her to vote for the “boat”. He allegedly tried to snatch the ballot paper as she said she would vote for the “sheaf of paddy”. But the victim put the paper inside the box.

This made Ruhul furious and he threatened her, he said.

Talking to The Daily Star, the victim’s brother-in-law said the woman had threatened him back.

Contacted, Elias Sharif, superintendent of police in Noakhali, confirmed the rape took place but claimed it was not related to voting.

“It is not true,” he said when asked about the victim’s allegation of being gang raped for voting for the BNP symbol.

The police official said they were trying to arrest the alleged rapists.

Officer-in-charge Char Jabbar Police Station Nizam Uddin said he asked the victim’s family to come to the station. “Once they come, a case will be filed,” he added.

Here is another excerpt from greenwatchbd.com 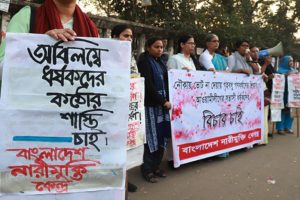 Photo of the severely injured woman went vital in the social media with strong messages of protest and demand for punishment of the perpetrators of the crime
Awami League general secretary Obaidul Quader on Wednesday said on the incident of gang-rape of a woman at Charjubli in Subarnachar Upazila in Noakhali, “No one will be spared whoever be the culprits.” 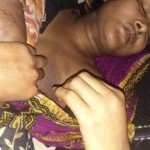 “I’ve heard about the incident. It didn’t take place in my constituency but in Noakhali. However, such an incident is not acceptable. The culprit must be punished. Those who’re guilty will be spared. I know the attitude of our leader,” he added.

The 40-year-old woman, being treated at Noakhali Sadar Hospital, told reporters that a gang of 10-12 men broke into their home in Subornachar Upazila on the night following the general election on Sunday.

According to reports reaching Dhaka, the culprits tied up the woman’s husband and their school-going daughter inside the house and dragged the woman outside to take turns in raping her.
The woman, who was also severely beaten, said the attack followed an argument she had with ruling Awami League supporters at a voting centre in Charjubili Union during the day of the general election. Local Awami League leaders have denied the allegation against them.

“Ten to 12 men, including Mosharraf, Salahuddin and Sohel, began breaking down our doors and windows. They came in and beat me up severely,” said her husband.
“We were tied up inside the house while my wife was taken outside and gang-raped. They also beat her severely.”

Neighbours helped the family to reach the Noakhali Sadar Hospital. Doctors there said the couple had suffered multiple wounds.

Nine people have been named in the case filed over the incident. Police say they have arrested three suspects and are ‘trying to catch the others’.

UNB reported, the Manusher Jonno Foundation (MJF), a non-government organisation, on Wednesday demanded exemplary punishment of those who gang-raped a woman in Noakhali.
The victim, a mother of four, was raped in Subarnachar Upazila in the early hours of December 31.

In a media statement, MJF Executive Director Shahin Anam demanded proper investigation into the incident and justice for the victim.
Although nine people had been sued, the key accused was roaming free, the MJF executive director said.

The MJF urged the government to take effective measures to prevent sexual violence against women. – GW News Desk with UNB 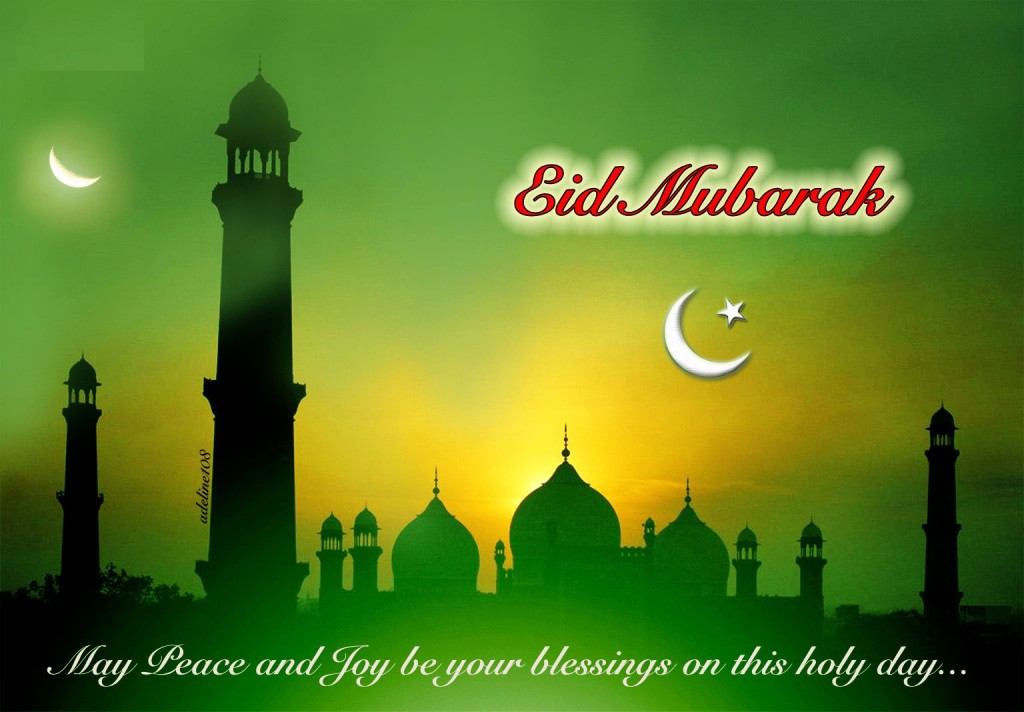 Opposition faces ‘a reign of terror’ ahead of elections: Reuters