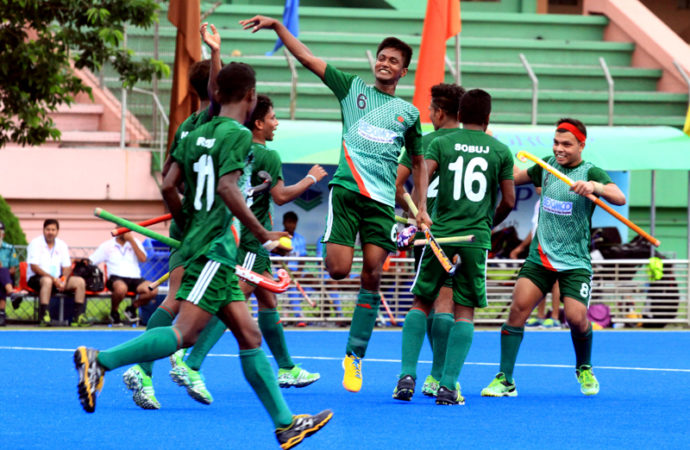 Bangladesh began their Boys’ Under-18 Asia Cup Hockey campaign with a nail-biting 5-4 victory over favourites India in the inaugural day of the tournament at Maulana Bhasani National Hockey Stadium on Saturday. Drag-and-flick specialist Ashraful Islam netted four goals, including a brilliant hattrick, while Fazle Hossain Rabby added the other to enable the boys in red and green salvage three vital points in the competition where they are taking part after one and a half decade. It has been 15 years since Bangladesh last took part in the event. They didn’t participate in the next two editions in 2009 and 2011. This is the first time in history that a Bangladesh U-18 team beat an India U-18 side in any international tournament. The last time an age-level Bangladesh side beat an Indian team was back in 2004 in the U-21 Challenge Cup Hockey in Dhaka. The home side earned their first penalty corner with only four minutes into the clock through Arshad Hossain but Ashraful’s final shot missed the back of the net. Four minutes later, Raju Ahmed’s shot on a Safiul Alam minus was blocked by an opposition defender. Ashraful then put Bangladesh ahead from a penalty corner in the 16th minute after Fazle’s push and Naim Uddin’s stop allowed him to take the shot that deflected off a defender before bouncing inside the post. India got their first penalty corner in the 20th minute but Silpreet Singh’s shot didn’t trouble the Bangladesh defence. India though equalised just a minute later when Dharminder Singh calmly sent the ball into the net from a penalty stroke. Konjengbam Singh netted a lovely goal in the 25th minute to give the visitors the lead when the Indian forward flicked home on a Dharminder shot. Bangladesh earned another penalty corner in the 29th minute and Ashraful converted it to restore parity on the second effort after the initial one was thwarted by the Indian defence. Raju pushed the ball forward, Naim stopped it before Ashraful fired home with a grounder. The home side got another penalty corner just before the first half whistle – their fourth in the game against India’s one – and Ashraful completed his hattrick. Hardin Singh equalised the margin in the 48th minute but the delight barely lasted as Fazle gave the hosts the lead just two minutes later with a magnificent strike following an Arshad minus from the right side. Dilpreet Singh made it 4-4 in the 53rd minute before Ashraful scored his fourth of the day from another penalty corner to seal victory. Bangladesh will face Oman in their second match this Tuesday at the same venue while India will be up against the same opposition on Sunday. Meanwhile in the day’s other matches, China outplayed Hong Kong 6-0 in the inaugural match while Pakistan thrashed Chinese Taipei 6-1 in the second match. Source: Dhaka Tribune