Atiqul Islam has said he is ready to replace election posters and banners with digital campaign if the Election Commission wants it and a legislation is made accordingly.

He made the remarks while campaigning at Fulpur in Rayerbazar on Wednesday after the High Court banned laminated posters in light of its damaging effect on the environment.

The campaigners have already hung such posters by the thousands across the city ahead of the Feb 1 polls.

“People are criticising the campaign for hanging the posters and banners because these are making the city dirty,” Atiqul said.

“I will change the campaign mode. I will campaign in a digital process instead of using posters and banners if the Election Commission wants it and a law is passed,” he added 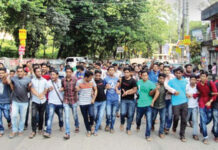 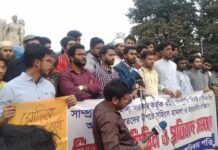 Is Awami League changing its strategy?

Protest calls in Bangladesh after Zia aide is shot