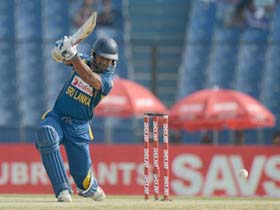 In the first wicket stand, Lahiru Thirimanne paring with Kusal Perera made 80 runs in 17.2 overs.

One down Kumar Sangakkara hammered a century scoring 103runs off 84 balls with 12 boundaries and an over boundaries to be adjudged man of the match.

Earlier, India posted 264 runs for nine wickets against Sri Lanka in their second match of the five-nation Asia Cup Cricket at Khan Shaheb Osman Ali Stadium in Fatullah on Friday.

Sent into bat first, Indian openers score 33 in 9.2 overs in the opening stand before Rohit Sharma was out.

In the 2nd wicket stand, opener Shikhar Dhawan partnering with skipper Virat Kohli made 97 runs in 17.1 overs to carry the team total to 130 runs for two wickets.

After the departure of Virat Kohli, Shikhar Dhawan continued his composer to contribute another 45 runs partnering with one down Ajinkya Rahane in the 3rd wicket stand to take the team total to 175 runs for three wickets in 35.1 overs.

Before being bowled off a Ajantha Mendis delivery in the nervous ninety, Shikhar Dhawan scored 94 runs off 114 balls with seven boundaries and an over boundary.

Ajantha Mendis captured four wickets for 60 runs in his 10 overs spell while Sachithra Senanayake bagged three wickets for 41 runs and Chathuranga de Silva and Lasith Malinga took one wicket each for 51 and 58 runs respectively.

Pakistan to have ‘three’ captains in Bangladesh tour