The stakes have never been higher. The goal is to get Bangladesh back on the best-case track. The political parties now have to do their share

The Awami League developed its Vision 2021 five years ago for Bangladesh as a middle-income country. This helped win the election. In 2012, the government then published a road map for how to get there. Over the past year, disquieting news has kept accumulating, however.

An unopposed election on January 5 returned Sheikh Hasina to power – the AL received more than two-thirds of the seats – and was criticised as illegitimate by the BNP. No easing of the crisis is currently in sight.

It is time to find ways to revive past optimism. The viability of the country’s key development asset and leading export earner, namely the textile and garment industry, will be instrumental. The Bangladesh economy has grown at nearly 6% per year in the past decade, and human development went hand-in-hand with economic growth.

Coupled with increased life expectancy, literacy, and per capita food intake, poverty dropped by nearly a third and more than 15 million Bangladeshis have graduated from poverty since 1992.

Multiple futures are possible for the country – futures that matter to all of us, inside and outside of Bangladesh. We live in a highly interdependent globalised economy with interlaced information systems and security. At a time when al-Qaeda is reasserting itself in the Iraq-Syrian borderlands, pressure on strategic yet fragile states such as Bangladesh can have serious repercussions also for its neighbours and other states halfway across the globe.

The views on Bangladesh’s potential vary widely. Some see it as a country whose developmental potential is blocked by political infighting and overstretched infrastructure, with business hindered by red tape, corruption, energy shortages and the ever-present risk of social unrest.

Others, such as Goldman Sachs chief economist Jim O’Neill, have argued that the densely populated and youthful country has the potential to become one of the world’s most vibrant economies. He includes Bangladesh in his “Next Eleven” group of countries that he expects to lead the next wave of high-growth economies.

For Bangladesh to aspire to a best-case scenario, it will need to increase GDP growth to 7.5 or 8% per year, via accelerated export and remittance growth with a corresponding increase in both public and private investment, and substantial efforts on many fronts.

Bangladesh is among the most densely populated countries in the world, with 1,174 people per sq km according to the World Bank. A declining population growth rate combined with a rapidly growing labour force could be turned into a significant demographic dividend in the coming years if more and better jobs can be created for the growing number of job seekers.

Improving labour force participation and productivity would help to further release the potential of the economy.

The preferred future is reachable. For it to materialise, though, two things need to happen: Political risk needs to be managed, and the country’s key assets leveraged.

Bangladesh’s critical economic asset is its $22bn readymade garment export sector that accounts for 80% of exports. Further political unrest could do damage to the country’s economic growth engine, which is facing problems of its own.

The dire working and safety conditions in Bangladesh’s garment and textile industry were brought to global public attention in April 2013 when a garment factory collapsed in Dhaka, killing more than 1,100 workers. The apparel industry creates 4 million direct jobs, but working conditions and environmental footprints are often terrible.

Attempts to address the social and environmental issues plaguing the apparel industry in Bangladesh are being made – the European buyer-funded Bangladesh Accord on Fire and Building Safety and the US buyer led Alliance for Bangladesh Worker Safety are just two highly visible efforts underway that have now become operational.

Through its booming apparel industry, Bangladesh is directly connected to Western and Asian consumer markets. How the industry’s future plays out will help decide whether Bangladesh can seize the potential of its youthful population and move onto a BRIC-like country trajectory, or whether the country will stagnate and even risk becoming a failed state.

The growth projections for the apparel industry in Bangladesh are impressive: It is expected to double in turnover by 2015 from 2010 levels, and triple by 2020. But labour rights, wage levels, and health and safety are the leading social issues that need to be sorted out.

Today, there are more than 5,600 factories producing for export. If we simply extrapolate on the trend, there could be more than 10 million workers and over 10,000 factories by 2020, unless significant factory consolidation takes place. If nothing happens, we could see Rana Plaza type accidents happen more often.

This tragic scenario must be avoided. Attaining greater productivity and achieving better in-country value added will be essential to rendering enhanced social and environmental conditions. Upgrading the supply chain is the way forward, with greater supply chain transparency and higher total resource productivity as a result.

To show how this can be done, Impact Economy – a global impact investment and strategy firm – has just issued my report, Creating Sustainable Apparel Value Chains, so industry stakeholders can begin to build toward a preferred future.

Redesigning production processes, improving infrastructure, and training can save up to 20% of chemical inputs, up to 40% of energy, and up to 50% of water. The report offers a framework that links greater resource productivity with an ambitious agenda to improve working conditions and environmental footprints.

A challenge is that companies often have no reliable data on their resource use, including water and energy, nor on their end-of-pipe treatment of used air and water waste. They often lack in-house knowledge and capacity to manage all relevant data dimensions.

But the effort is worth it. Improving the economic competitiveness and environmental and social performance of the country’s apparel industry can play an enabling role in creating the context on which a middle-income future can be built.

The stakes have never been higher. The goal is to get Bangladesh back on the best-case track. The political parties now have to do their share to provide a stable and legitimate operating environment so that a more competitive, and socially and environmentally sounder, garment sector can make its contribution to development. 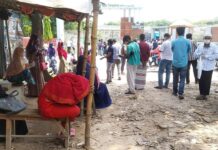 Covid-19 tests must be done most expeditiously

Politics and death in Bangladesh- The noose tightens