Wheat imports soared as a section of people has switched to flour in the face of high prices of staple rice, said importers.

Wheat imports grew 28 percent year-on-year to 9.41 lakh tonnes from July to mid-September, according to data compiled by the food ministry.

“Many people have started eating wheat flour as a substitute of rice as prices of flour are much lower than the prices of the staple,” said Bishwajit Saha, general manager of the City Group of Industries, one of the leading commodity importers and processors.

On September 16, retail prices of coarse grains, consumed mainly by the poor and low income groups, shot up to Tk 50-54 a kg in Dhaka city, according to the state-run Trading Corporation of Bangladesh (TCB).

Prices fell early last week amid increased imports and release by millers and traders following a meeting between millers and the government.

Yesterday, retail prices of coarse rice were Tk 48-50 a kg whereas flour was selling at Tk 28-34 a kg, meaning the average wheat price was Tk 18 or 38 percent less than the average coarse rice price.

Saha said the price difference has encouraged a section of people in both rural and urban areas to shift to flour. “This has fuelled demand for wheat further,” he said.

Generally, prices of rice remain higher than flour. But the price gap between the two grains remains normally less.

For example, prices of coarse rice were Tk 36-38 a kg on September 30 last year against flour prices of Tk 25-34, according to the TCB.

Importers and processors said wheat consumption is rising every year owing to a shift in consumers’ diet preference and a flourishing bakery and processed food market. Imports of the grain trebled to 56.90 lakh tonnes in five years till 2016-17 to meet the increasing demand as domestic production has remained stuck at 13 lakh tonnes for the last couple of years, according to official data.

“Many poor people are consuming flour as price of rice has become exorbitant,” he said.

Importers opened letters of credit for the import of 25.14 lakh tonnes of wheat until September 23, Bangladesh Bank data showed. 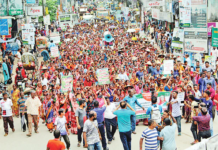