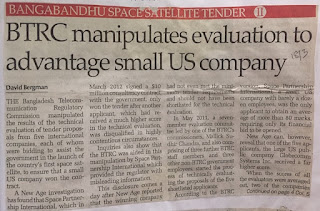 The Bangladesh government has in the last few days launched the country’s first satellite, named Bangabandhu-1.

Back in May 2012, I wrote a series of three articles for the Bangladesh daily newspaper, The New Age about how the whole process started with serious irregularities in the tender process that resulted in a small US company receiving a $10 million consultancy contract when it did not meet the most basic tender requirements.

Since the newspaper’s website before 2016 is no longer online, I am publishing the articles again. Below is the second of the three reports, published on May 17, 2012. The links to the first article is here: US bid winner doesn’t meet tender requirements. The final article is available here: Family links raise further questions about tender.
—————–

The Bangladesh Telecommunication Regulatory Commission manipulated the results of a technical evaluation of tender proposal involving five international companies each of whom were bidding to assist the government in the launch of the country’s first space satellite to ensure that a small US company won the contract.

A New Age investigation has found that Space Partnership International, which in March 2012 signed a $10 million consultancy contract with the government, only won the tender after another applicant, which had received a much higher score in the technical evaluation, was disqualified in highly contentious circumstances.

This disclosure comes a day after New Age reported that the winning company had not even met the minimum tender requirements and should not have been shortlisted for the technical evaluation.

In May 2011, a seven member evaluation committee led by one of the BTRC’s commissioners, Mallick Sudhir Chandra, and also comprising of three further BTRC staff members and three other non-BTRC government employees, started the process of technically evaluating the proposals of the five short-listed applicants.

According to the BTRC’s version, Space Partnership International, a small US company with barely a dozen employees, was the only applicant to obtain an average of more than 80 marks – requiring only its financial bid to be opened.

New Age can however reveal that one of the other five applicants, the large US public company Globecomm Systems Inc, received a far higher score.

‘When the scores of all the evaluators were averaged, two of the companies received over 80 marks,’ one of the evaluators told New Age on the basis that his name would not be disclosed fearing repercussions. ‘Space Partnership International received 81 marks, but Globecomm received 92 marks.’

At a meeting of the committee in early June a piece of paper was distributed to the evaluators summarising all the marks given.

‘I could see that not only had Globecomm received an average of over 90 marks, but that each of the seven members of the committee had given Globecomm over 90 marks,’ this person added.

Another evaluator confirmed this scoring.

It is at this stage, that New Age has learnt that the evaluation committee came under pressure from within the BTRC to disqualify Globecomm on the basis that it broke a condition in the tender which prohibited applicants from having tied to satellite manufacturers.

The claim that Globecomm was involved with manufacturing was first made in a letter, dated 8 June 2011 and titled ‘confidential’, which Space Partnership International’s managing director Bruce Krapelsky sent to the BTRC’s evaluation committee chairman.

The letter stated that Globecomm was ‘a manufacturer and supplier of ground-­based systems directly related to the satellite industry.’

Krapelsky supported this contention by pointing to wording on Globecomm’s website which refers to the company’s ‘engineering expertise’ having produced ‘a wide range of satellite and wireless terminal products’.

On the basis of this letter, the evaluation committee disqualified Globecomm. ‘[I]t was found from the contents of [Globecomm’s] website that it was offering satellite earth stations and related equipments as its products,’ it stated.

However space satellite experts have told New Age that it is not correct to claim that Globecomm was involved in manufacturing.

Robert Bell, executive director of both the Society of Satellite Progesional International and the World Teleport Association, a US based satellite industry trade association whose members include Globecomm told New Age that, ‘The company is not a manufacturer. It is a system’s integrator.’

‘In the space satellite sector, there is a clear distinction between manufacturers who make the components and integrators who buy the already manufactured components and create a system from them,’ he added. ‘I have never heard of Globecomm being talked about as being involved in manufacturing,’

Andrew Smith, the President of Integral Systems Europe Limited, who once worked at Globecomm confirmed this. ‘The company has nothing whatsoever to do with the manufacturing of ground stations. They are not manufacturers but integrators.’

New Age can also confirmed that members on the BTRC’s evaluation committee, none of whom have any expertise in the satellite sector, did not seek any expert opinion on the accuracy of Space Partnership International’s claims.

According to one evaluator, BTRC’s chairman in fact specifically rejected this suggestion at a meeting he arranged with the evaluation committee.

‘It was suggested that it would be a good idea to get an expert to assess whether Globecomm should be disqualified. But the chairman said there was no time for that,’ a person who was present at the meeting told New Age.

In addition, if reference to ‘producing products’ and ‘engineering’ on a company’s website was the basis for disqualification, the application of Space Partnership International – the company that won – would also have to be under question.

This is because the website of RKF Engineering Solutions Ltd, the company with which Space Partnership International had applied for the tender, has a whole section titled ‘products and services’ stating that ‘RKF offers a host of products’ and is ‘working with … manufacturers’.

Globecomm appealed against its disqualification to a procurement review panel in September 2011.

At the hearing, BTRC supported its view that Globecomm had ties with manufacturers by claiming that the company had acquired a ground station division of the satellite manufacturer, Matra Marconi.

In response, Globecomm told the panel that the division purchased in England was not involved in the manufacture of satellites or earth station equipment, and that the subsidiary company that Globecomm had created to run the division was in any case closed down in 2006.

The review panel however did not believe the company, and ruled that that ‘because Globecomm could not prove one of the vital conditions of the RFP documentarily … it is conclusive proof that Globecomm Systems Inc has a ties/interest with Matra Marconi who is a satellite manufacturer.’

Andrew Smith, who used to work for the Matra Marconi division before it was purchased by Globecom however told New Age that, the division ‘had nothing to do with manufacturing of satellite or ground system. It was just involved in earth station system integration.’ In addition, records filed with UK’s ‘Companies House’ corroborate what Globecomm story about the establishment and sale of the company.

Before Space Partnership International could sign the contract, however one further obstacle was placed in BTRC’s way and New Age has discovered that this forced the government regulator to change the actual scoring given by the technical evaluation committee.

‘In the middle of February 2010, six months after all the evaluations were done, I was asked to sign a sheet which had new scoring for Globecomm. In the new sheet, the total scoring for the company was now below 80,’ one of the evaluators told New Age.

This was confirmed by another committee member.

The BTRC changed the scoring as the cabinet’s purchase committee had asked to see the score sheet relating to the disqualified bidder.

‘There was no meeting of the evaluation committee to consider this. I was told that since Globecomm had a conflict of interest which disqualified it, its technical scoring should be lowered,’ the person added.

In response to a detailed set of questions about the evaluation process both Bruce Krapelsy, Space Partnership International’s Managing Director and Zia Ahmed, BTRC’s Chairman told New Age that the selection process was conducted ‘properly’ and that
the company was selected because it was the best qualified.

Krapelsy said that, ‘Our focus is now on helping BTRC to achieve its objectives with respect to the construction, launch and implementation of the Bangabandhu satellite system.’

At an earlier meeting, when asked how such a small company managed to beat much bigger companies, Krapelsy told New Age that, ‘We found our way through as we were clearly the best. We brought a very unique combination of expertise to this project that none of the other players had from a complete perspective.’

He said that he did not know what happened at the purchase committee. ‘I was not present, it was the chairman of the assessment panel who attended.’

The chairman of the assessment panel decelined to comment. His term as commissioner ended on April 26, 2012. He is waiting to hear whether he will be reappointed commissioner for another term.

Iftekharuzzaman, executive director of Transparency International Bangladesh told New Age, ‘Before proceeding any further on the project the Government should constitute a full-fledged independent investigation in order to establish, without any bias or influence, if any violations took place, in which case the bidding process should be re-opened and the wrongdoers should be handed exemplary punishment,’

He also called on the US Government to ‘conduct due investigations … in case the US company or any associated quarter has been involved in any malpractice and abuse of power,’ he said, emphasising that the US ambassador was present at the contract signing ceremony.