The National Board of Revenue has instructed its field offices to ensure installation of electronic cash register or point of sales machines at all eligible shops by January 15, NBR chairman Md Nojibur Rahman said on Thursday.
‘We made the instruction in line with the decision of the Fiscal Coordination Council of the finance ministry for ensuring accurate records of sales of shops to collect proper value-added tax,’ he said at a press briefing at the revenue board.
The revenue board made the installation of ECR or POS at shops in 11 categories mandatory in 2009 to prevent evasion of VAT collected from the consumers by the shopkeepers.
But till now the response from shopkeepers in setting up the equipment is very poor.
The field-level VAT offices of the NBR identified 11,005 shops eligible for using the technology and of which 8,559 shops were selected for installation of ECR machines or POS software.
There are 38,000 VAT paying units from the 11 sectors including hotels, restaurants, sweetmeat shops, fast food outlets, beauty parlours, furniture shops, community centres, departmental and general stores, jewellery, all shops at shopping malls in the metropolitan areas and, medium and large wholesale and retail shops across the country.
According to the latest data of the NBR, only 2,970 shops or 35 per cent of the selected shops installed the ECR or POS software.
The remaining 5,589 selected shops have not yet installed the technology even in half decade since the introduction the mechanism.
There are wide allegations that even the shops which set up the system do not use it to evade deposition of VAT collected from consumers to the government exchequer.
Many of the businesses just showcase the machines at their shops. The machines either remain out of work or the shopkeepers refrain from using those.
Nojibur said that NBR asked the field level VAT officials for persuading shopkeepers for setting up the technology.
VAT intelligence office of the board will monitor the progress in installation and use of the ECR or POS machines, he said.
‘We also request the consumers to seek ECR or POS generated VAT challan after making payment against their shopping,’ he said.
At the briefing, NBR chairman also sought cooperation from the country’s media outlets in achieving the huge revenue collection target of Tk 1,76,370 crore set by the government for the current fiscal year.
He said that the revenue board was also working with the religious affairs ministry to train up religious leaders about the importance of tax payment so that they can motivate people while talking to people at Mosques, Hindu Temples, Buddhist Pagodas and Christian Churches for paying tax.
‘I also requested the Bangladesh Bank governor for asking banks to obtain electronic taxpayer identification number or business identification numbers of bank account holders,’ the NBR chief said.
He also informed reporters about NBR’s recent steps to prevent income tax, VAT and duty evasion.
NBR members and other high officials were present at the briefing.
Source: New Age 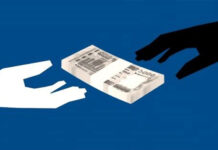 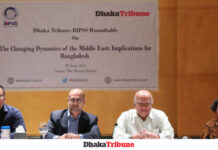