Allama Shah Ahmad Shafi, chief of Hefajat-e Islam, comes out of his party headquarters with the help of his supporters at Lalbagh in the capital on Monday. Later he got into a microbus and went off for Chittagong.

Hefajat-e Islam chief Allama Shah Ahmad Shafi was taken out of the organisation’s headquarters at Lalbagh in the capital hours after his supporters carried out deadly violence in Dhaka and Narayanganj leaving at least 15 persons, including three lawmen, killed.

Shafi was given two options—getting arrested or leaving Dhaka—and the Islamist group ameer chose the second one, according to sources in the police.

The Hefajat chief was taken on a red microbus around 3:15pm after a three-hour negotiation between the detectives and the party leadership at Zamiatul Arabia Madrasa, which is known as central office of the Qawmi madrasa-based Islamist group.

His son, Anas Madani, and party spokesman Shafiqul Islam are accompanying him to the airport, from where he will fly for Chittagong, party sources and police confirmed The Daily Star.

“He has started for Chittagong. We are not sure whether he will be arrested on the way,” Hefajat leader Moulana Altaf Hossain told The Daily Star.

In a text message sent to journalists around 3:45pm, the Dhaka Metropolitan Police said Shafi has not been arrested.

The police move came in the wake of unprecedented violence, which began in the capital ahead of the organisation’s Sunday afternoon rally and spilled over to Narayanganj where at least seven, including three law enforcers, killed till Monday afternoon.

A team of detectives led by Deputy Commissioner Harunur Rashid went to Hefajat headquarters around the noon.

After they held talks for around three hours, the police team came out.

“We’ve heard that the Hefajat chief wants to go to Chittagong on his own,” said Rashid. 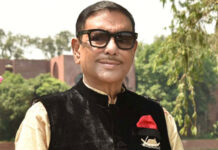 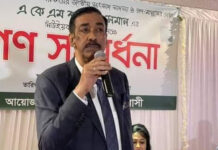 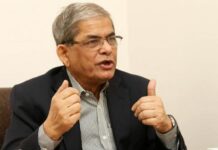 Dhaka Siege to be made successful at any cost: Hefajat