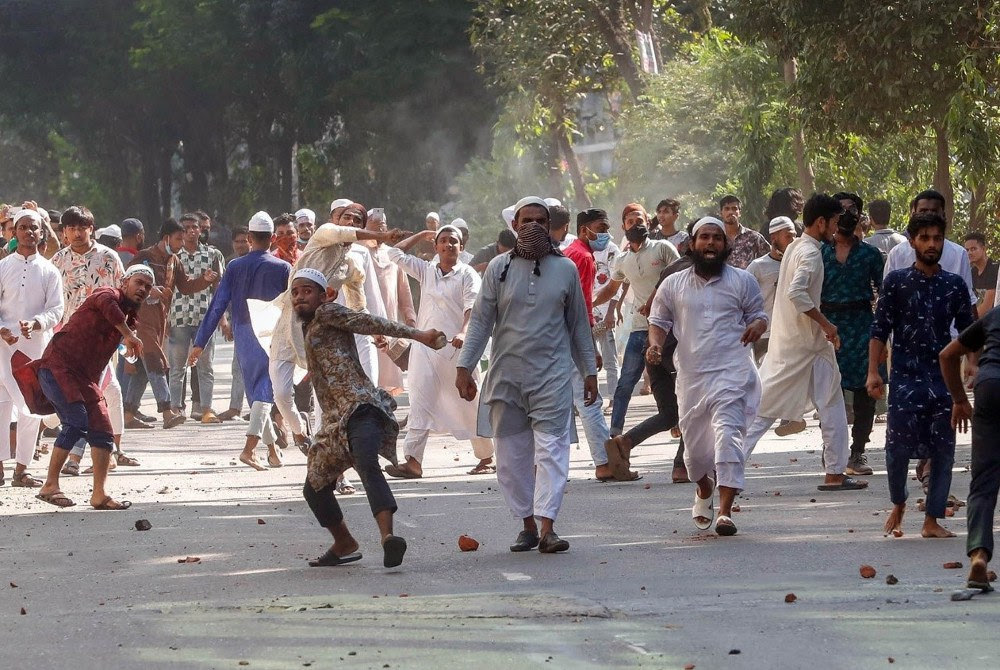 Rock-throwing protesters and police clashed in Bangladesh’s capital as thousands of Muslims took to the streets after Friday prayers to express anger over an online video showing the alleged desecration of the Quran at a Hindu festival site, during a third day of inter-communal violence in the country.

In other developments on Friday, a Hindu man was killed in an attack by a Muslim mob in southeastern Bangladesh as venues hosting the annual Durga Puja festival were vandalized throughout the nation in response to the alleged desecration. At least five police officers and scores of people were also reported injured in violence on Friday – a day after four people were shot and killed during related protests.

The Hindu man, a 42-year-old follower of the International Society for Krishna Consciousness (ISKCON) – also known as Hare Krishnas – was killed in an attack in Noakhali district in southeastern Bangladesh, authorities said.

Jatan Kumar was injured and later died at a hospital, police sub-inspector Enamul Haque said, adding that nearly 150 police, including the local station chief, were injured in the clashes.

“Several hundred Muslim devotees carried out an attack on the houses, shops and temples after Jummah prayers at Chowmuhani town,” Enamul told BenarNews. “We need time to assess the damage and the actual number of injured persons.”

“Several hundred Hindus were injured. The attackers vandalized at least 12 temples, 30 shops and about 100 houses of our people,” he told BenarNews.

The attackers “set fire to temples and destroyed them. They torched three cars and six motorbikes,” he said.

Hindus make up about 10 percent of the more than 160 million people in the Muslim-majority country.

In the capital Dhaka, police arrested five people linked to the rally, Sazzadur said. BenarNews reporters at the scene reported that the protest turned violent after demonstrators started hurling sandals and bricks at the police who then fired tear gas and rubber bullets to disperse them.

In southeastern Bangladesh, a mob attacked a puja venue in Chittagong but fled after security forces charged them with batons, Palash Kanti Dey, executive secretary-general of the Bangladesh Jatiya Hindu Mohajote, told BenarNews.

Authorities said that more than 100 people had been arrested across Bangladesh since mob violence against Hindu temples began on Wednesday. Border Guard Bangladesh troops were also deployed in 30 of the nation’s 64 districts.

“The massive attacks on the Puja temples in different parts of the country is nothing new but a consequence of regular attacks on the minority group,” said Golam Kuddus, president of Sammilita Sangskritik Jote, an organization of cultural activists.

There is a group taking advantage of attacks on religious minorities, he alleged.

“There is a communal evil group in Bangladesh. They are doing such incidents at different times to make the country unstable,” he added.

On Thursday, Prime Minister Sheikh Hasina promised to thoroughly investigate the case, saying the culprits “will be hunted down and punished.”

She also said that Hindu-majority India should remain vigilant against an escalation of any communal violence.

Her comment came after a politician asked Indian Prime Minister Narendra Modi to express concern with Bangladesh officials over “vandalizing and desecration” of Hindu idols and temples, calling the incidents “painful and shameful.”

“As a result, now the Hindu population in Bangladesh is 8 percent when it once was 24 percent. India should create pressure on Bangladesh over the issue,” he told BenarNews.

In Dhaka on Friday, protesters chanted anti-India slogans and accused Hasina of being too close to Delhi.

Bangladesh’s constitution designates Islam as the state religion but upholds the principle of secularism and prohibits religious discrimination.

Despite that, communal attacks on religious minorities in Bangladesh are on the rise, the U.S. State Department said in its “2020 Report on International Religious Freedom,” released in May, listing incidents of violence against Hindus, their properties and temples.

A crowd of several hundred looted, vandalized and set fire to Hindu family homes in Cumilla after rumors spread that local Hindus supported French satirical weekly newspaper Charlie Hebdo’s publication in France of caricatures of the Prophet Mohammed, initially published in 2015 and reprinted in September 2020, the report said.

Paritosh Paul in Kolkata contributed to this report.

‘Hoques honeymoon in Dubai or Maldives’