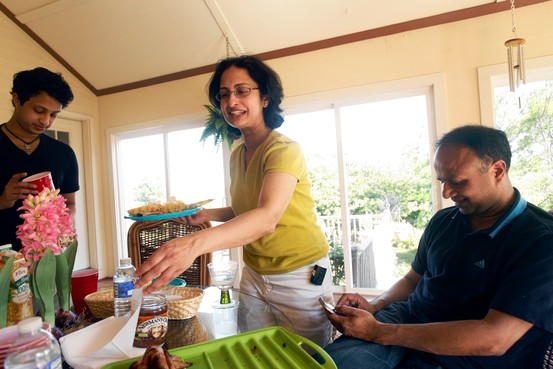 Noah Rabinowitz for The Wall Street JournalManoj Kumar, right, with his family in Cortland, N.Y., Sunday. The Indian ear, nose and throat specialist opened his own practice in the U.S. in 2007.

Asians are the fastest-growing, most educated and highest-earning population in the U.S., according to a new report that paints the majority-immigrant group as a boon to an economy that has come to rely increasingly on skilled workers.

The number of Asians in the U.S. quadrupled between 1980 and 2010 to about 18 million, or 6% of the total population, according to “The Rise of Asian Americans,” a study released Tuesday by the nonpartisan Pew Research Center. The bulk of Asians in the U.S. trace their roots to six countries: China, India, Japan, Korea, the Philippines and Vietnam.

As a group, Asians place more value than Americans overall on marriage, parenting, hard work and careers, according to the report. Irrespective of their country of origin, Asians overall believe that American parents are too soft on their children.

“They are the highly skilled workforce of the 21st century, but they also bring traditional values,” said Paul Taylor, executive vice president of Pew and editor of the 215-page report, which combines a survey of 3,511 Asians in 50 states with analysis of economic and demographic data from the U.S. census.

Half of Asians have a college degree, compared with 30% for all Americans, and their median annual household income is $66,000, versus $49,000 for Americans as a whole.

Asians are more likely than the overall U.S. population to be married, or to live in a multigenerational household, and their children are more likely to be raised in a two-parent home, the report says.

“Asians exceed Americans on educational credentials and socioeconomic markers of success despite being predominantly first-generation immigrants,” Mr. Taylor said. He added this sets Asians, three quarters of whom are foreign-born, apart from previous waves of immigrants.

Economics plays a role in the shift. Hispanics, including undocumented immigrants, tend to do blue-collar jobs, and have been deterred in recent years by a slowdown in construction, as well as tighter border security. Asians, who have higher levels of education, mainly come legally on student visas or employment programs to work in sectors that are thriving, such as technology.

The Pew report says those trends should help propel the growth of the Asian population in the U.S. to 41 million in 2050, more than double its current size.

That rise can help the country forge ties with fast-growing economies such as China and India, says Conrad Lee, the first minority mayor of Bellevue, Wash. Mr. Lee said one of his goals is to “promote relationship-building with China, India and Korea” through the growing numbers of Asian immigrants who have settled in the city of 130,000 outside Seattle. Asians, who account for 28% of Bellevue’s population, are in close contact with friends and relatives back home, he said.

“Business ties start with personal relationships,” said Mr. Lee, a Chinese-born engineer who moved to the area 40 years ago to join Boeing Co.

Bellevue has benefited from the newcomers. Indians have helped raise millions of dollars for a performing-arts center. A statute of Mahatma Gandhi stands outside the town library as a tribute to the community.

Much of the Asian influx has occurred since the 1990s, when technology titans such as Microsoft Corp., based in nearby Redmond, Wash., sought talent. In 2010, U.S. universities awarded 45% of all science and engineering degrees to Asians, according to the Pew study.

After earning mathematics and computer-science degrees at Eastern Michigan University, Chinese national Maria Zhang worked for Microsoft and Zillow, an online real-estate firm, before starting a mobile technology company, called Propeld, in Bellevue in late 2010. Her firm’s team of 10 is almost entirely Asian. She taps into a U.S. network of alumni of Tsinghua University, a prestigious Chinese institution. “It’s extremely hard to recruit high-quality engineers,” she said.

The Pew study found Asians three times as likely as immigrants from other parts of the world to get U.S. permanent residency on the basis of employment rather than family ties.

Manoj Kumar, an Indian physician, is among them. The ear, nose and throat specialist completed his training in the U.K. and received a green card based on his professional expertise. He opened his own practice in Cortland, N.Y., in 2007.

“It’s too many games, baseball and soccer,” Dr. Kumar said.

Write to Miriam Jordan at miriam.jordan@wsj.com

US ‘saddened’ by deaths in Bangladesh clashes

Over 1.6m without power as Irma bears down on Florida