Rice paddy price begins to rise ahead of impending tariffs

The price of rice paddy has begun to rise in anticipation of the tariffs to be reintroduced on rice imports in the government’s budget for the coming fiscal year.

The impact of the tariffs has yet to be felt in the rice market due to the relatively low trade after Eid and lower rice imports, but traders say rising paddy price may soon affect the price of rice.

According to the director general of the Food Directorate, sufficient food reserves have prompted the government to purchase rice from domestic sources instead of imports this season.

Finance Minister AMA Muhith had announced the reintroduction of the 28 percent tariff on rice imports in the prospective budget for the 2018-19 fiscal year after it was reduced following a poor harvest and flood damage in 2017.

Muhith said the tariff was aimed at protecting farmers and ensuring that they received a fair price.

The new tariffs are preventing rice imports and have raised the price of rice paddy by Tk 100-150 per maund, he said.

“The government is aware of the coming elections and they understand the benefits to farmers and consumers of the situation. I do not wish to say more on the matter. We just buy paddy from farmers and sell rice.”

Director General Md Arifur Rahman told bdnews24.com that the tariffs will only have a small effect on imports.

“The good news is that there is no shortage of domestic rice, so falling imports will have little effect. The price of rice paddy will rise a bit due to the tariff, so the price of rice will rise by Tk 1-2.”Most domestic demand is for large-grained rice, said Rahman, saying that if the price rises then the government would institute an Open Market Sale for a targeted group if the price rose.

Food reserves this year are ‘quite good’ after the imports of 4 million tonnes of rice last year, he said. The food directorate chief said he does not foresee any major challenges in the coming five to six months and no real need for imports.

But, as tariffs rise, the price of Basmati and other fine-grained rice may rise as well, he said.

According to the Food Ministry’s Food Planning and Monitoring Unit, the government currently has 1,323,000 metric tonnes in food reserves. 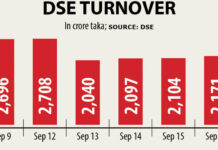 Remittance crosses record $20b in 10 months

As Firms Line Up on Factories, Wal-Mart Plans Solo Effort