Dhaka, Mar 11 (UNB) – Pro-hartal elements torched at least six vehicles in the capital, Noakhali and Mymensingh districts on Monday, ahead of Tuesday’s hartal called by the BNP-led 18-party alliance.

In the capital, three vehicles were set on fire at Puranapaltan, Bangshal and Rampura.

Witnesses said a private car was set ablaze at Azad Products lane in Puranapaltan at about 5:15 pm.

Another vehicle was torched at Raisabazar in Bangshal area at the same time.

The pro-hartal elements set alight a private car at Wapda Road in Rampura at about 6:30 pm.

Meanwhile, three vehicles were vandalised in the city’s Elephant Road area at about 5:20 pm.

The hartal supporters also exploded 30/40 crude bombs and 10 handmade bombs around the BNP’s Nayapaltan central office at about 5:30 pm.

Police dispersed them by firing bullets.

In Noakhlai, BNP activists staged demonstrations and torched two buses in the district town protesting the arrest of its party leaders, including district unit president and central joint secretary general Mohammad Shahjahan, from the party office in the capital.

Police said several hundred BNP activists brought out a protest procession in Maizdi area in the town in the evening.

Later, they damaged some vehicles and set fire on two buses.

In Mymensingh, the pro-hartal activists torched a bus at Dhopakhola crossing in the district town in the evening, leaving 10 passengers injured.

Witnesses said a group of 10/15 hartal supporters set the bus on fire after pouring petrol on it. The 10 passengers were hurt as they jumped off the bus to get down from it.

On information, firefighters rushed in and doused the blaze. Police arrested on person in this connection. 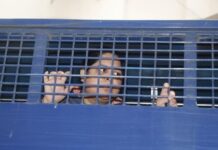 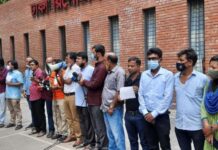 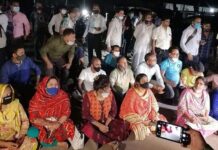 A Week In Shahbagh