BNP acting secretary general Mirza Fakhrul Islam Alamgir on Thursday urged all to keep their vehicles off roads on December 9 when the opposition alliance will observe countrywide road blockade.

“Please don’t take your vehicles to the streets and make the blockade successful by joining the people that will bring the opportunity to resolve all problems,” he said while addressing a rally in front of BNP’s central office at Nayapaltan in the city.

The BNP-led opposition alliance declared the blockade as part of its anti-government movement for restoration of caretaker government system.

The programme was organised by Dhaka city unit of the BNP-led 18-party alliance to mark December 6 as Democracy Free Day. Military dictator HM Ershad had been ousted from the power on this day in 1990 through a mass upsurge.

Several thousands opposition leaders, workers and supporters attended the rally on the main streets for which the vehicle movement was halted in front of BNP office for several hours.

Bitterly criticising the government for corruption, Mirza Alamgir said the World Bank team was not happy and they left Bangladesh. “Prime minister branded Abul Hossain as patriotic but it is now proved that he is not a patriotic but a king of thieves,” he added.

He said ACC does not want to include the name of Abul Hossain as it also knows all bribe money was siphoned off through this person.

The BNP leader said price of gas, electricity and oil will be increased again but they will not accept it. “We will forge movement against price hike decision,” he said. 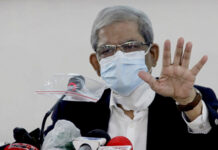 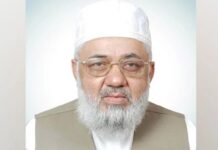 Ershad should have been hanged