Jatiya Party Chairman GM Quader yesterday said the current constitution of the country is contradictory to democratic practice as it gives all power to a  “single person”.

“It’s not possible to practise democracy in line with the current constitution. The constitution is contradictory to democratic practice,” he said.

Speaking at a views-exchange meeting with the leaders of Gazipur city unit of Jatiya Party and its associate bodies at the party chairman’s Banani office, GM Quader also said many articles of the constitution need to be amended to ensure democratic practice in Bangladesh.

“No member of Parliament from the ruling party can oppose any decision of the government due to Article 70 of the constitution. It helps consolidate all powers in the hands of one person. About 90 percent of the country’s executive, legislative branches and also judiciary through the president is under the control of the head of government. So, nothing is possible to do going beyond what the head of government wants to,” he observed.

GM Quader, also the deputy opposition leader in parliament, said a law must be enacted in accordance with the constitution for the formation of the Election Commission to ensure a free, fair and credible election.

GM Quader said BNP Chairperson Khaleda Zia is not in politics after getting out of jail on  “bond” while her son, Tarique Rahman, has been convicted and is staying abroad.  “There are serious divisions among the rest of the leaders (of BNP).”

Stating that AL is busy running the government and carrying out development activities, he said the ruling party has almost no presence in the field of politics.  “Only Jatiya Party is vocal in politics to realise the demands of people.”

“Our party is moving forward braving various slanders and conspiracies. The people of the country are frustrated with politics due to the activities of Awami League and BNP. They now want to see Jatiya Party in power…”

He criticised State Minister for Information Dr Md Murad Hassan for, what he said, making “derogatory comments against Jatiya Party founder HM Ershad and giving the announcement for changing the status of Islam as the state religion of Bangladesh.

“It’s a nefarious act. He must apologise for this. The state minister has broken his oath to preserve the constitution,” GM Quader alleged. 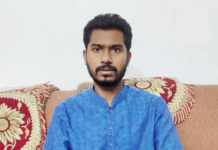 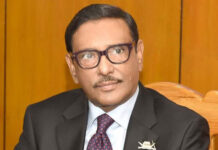 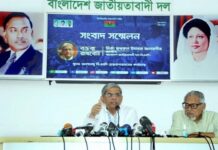