The production of Boro rice may decline by 1.5 per cent year-on-year to 1.90 crore tonnes in the current harvesting season because of the recent heatwave and pests attacks, according to the US Department of Agriculture (USDA).

As a result of the heat, key industry contacts believe it may be difficult for Bangladesh to achieve the target of producing 2.05 crore tonnes of the grain this year, said the USDA Foreign Agriculture Service (FAS) in its report released last week.

The agriculture ministry, however, expects that the yield would go past two crore tonnes during this year’s harvest, up from the previous year’s 1.96 crore tonnes estimated by the Bangladesh Bureau of Statistics.

The USDA had estimated Boro output at 1.93 crore tonnes the previous season.

Boro accounts for nearly 55 per cent of annual rice production, and farmers began harvesting the crop in late April.

The FAS Dhaka contacted Boro rice farmers from various parts of Bangladesh, and the farmers reported an expectation of a bumper crop this year.

“Though, some farmers reported damage caused by a short heatwave in the first week of April,” the report said, adding that the agriculture ministry was in the process of estimating the full extent of the production loss caused by the heat.

The USDA’s estimate of acreage of Boro is also lower than the Department of Agricultural Extension’s (DAE’s) forecast.

The US agency said farmers cultivated the paddy on 47 lakh hectares this season. The DAE put the number at 48.83 lakh hectares.

“Their [the USDA] estimate is not realistic. The yield is going to increase a lot this year, and we think the overall production will be no less than two crore tonnes.”

Because of the higher prices of rice in the domestic market, a section of farmers grew Boro paddy on the land they cultivated wheat, maize and mustard earlier.

“We also saw an increased acreage of hybrid rice. Overall, the acreage has expanded,” said Asadullah.

The output is also expected to go up by 3.5 per cent to 3.58 crore tonnes, it said, on the assumption of favourable weather conditions, sufficient supply of seed and fertilizers, proper irrigation, and continued support from the agriculture ministry and the DAE.

The USDA raised its projection on the production of pre-monsoon crop Aus, and rain-fed Aman rice.

The government continued to encourage farmers to produce hybrid and some high-yield rice varieties such as BRRI Dhan-50, BRRI Dhan-54, and BRRI Dhan-84 and distributed hybrid seeds and fertilizers to boost domestic production of the grain to contain prices.

“The Covid-19 pandemic and its associated lockdown measures have led to consumers stocking personal allocations of rice, thereby driving up domestic prices. Speculation in the market is also driving up prices,” said the USDA.

High prices have led to greater returns for farmers, but the farmers are faced with rising labour costs, so the profit increases are minimal this year, it said.

“Weather conditions over the next month will be important to monitor. Farmers were late to plant this year’s Boro rice crop, so the upcoming monsoon season could dramatically impact this year’s harvest.”

The USDA said approximately 50 per cent of Boro rice would be harvested by the second week of May when the monsoon season was expected to start.

It forecast a decline in rice import to 500,000 tonnes in anticipation of a strong harvest and increased rice production in the upcoming Aus and Aman seasons. 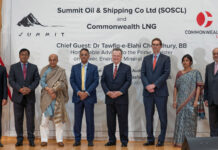