BNP leaders and activists hold a token hunger strike in front of the National Press Club in Dhaka on Wednesday demanding release of their party chairperson Khaleda Zia. — Sourav Lakser

The Bangladesh Nationalist Party on Wednesday observed token a hunger strike, duration of which was shortened being asked by the police in Dhaka and at places across the country, vowing to continue peaceful movement for the release of party chairperson Khaleda Zia and fair general elections under a neutral government.
Addressing the human chain in Dhaka, party leaders reiterated that the government would not be allowed to hold the next general election without Khaleda, now in former Dhaka Central Jail being jailed for five years.
Khaleda’s lawyer Zakir Hossain Bhuiyan told New Age Wednesday evening that they were yet to get the certified copy of the verdict which was delaying appeal against the verdict pronounced on February 8 and bail petition for the former prime minister.
‘The judge has released the verdict to the copying section on Wednesday six days after she had been jailed,’ Zakir said.
He said that Khaleda might appeal by Saturday if she was given the certified copy today.
Party leaders said that they would continue legal battle and street movement for the release of Khaleda.
The party, however, announced no programmes after the three-day countrywide second-phase protests that ended Wednesday through the hunger strike.
The duration of the hunger strike in Dhaka city was shortened by three hours from six hours. The police allowed the hunger strike for four hours in Sylhet and only one hour in Lakshmipur and Magura.
On Saturday, the party announced three-day protests including countrywide token hunger strike for eight-hour from 9:00am for Wednesday.
On Tuesday the party announced that the hunger strike in front of National Press Club would be held from 10:00am to 4:00pm.
Finally, BNP centrally had to shorten the hunger strike by three hours that ended at 1:00pm being asked by the ‘authority.’
New Age correspondents reported that in Bogra, BNP leaders and activists observed the hunger strike in front of the party office for seven hours from 10:00am while in Barisal for six hours.
According to Staff Correspondent in Sylhet, BNP curtailed the hunger strike at Registrar’s Math by four hours being asked by the police because of president Md Abdul Hamid’s scheduled visit to Sylhet today.
Sylhet Kotwali police station officer-in-charge Gausul Hossain told New Age that they requested BNP leaders to shorten the programme for maintaining security ahead of the president’s visit.
New Age correspondent in Lakshmipur reported that police allowed the district BNP to hold hunger strike in front of Lakhsmipur Press Club for only one hour from 9:00am, according to district BNP general secretary Sahabuddin Sabur.
In Magura, BNP observed the hunger strike in front of Sadar upazila parishad for one hour from 11:00am.
Chittagong office reported that Chittagong city, north district and south district BNP observed the hunger strike at Chittagong city’s Nur Ahmad Road for seven hours from 9:00am.
In Dhaka city, BNP secretary general Mirza Fakhrul Islam Alamgir along with other senior leaders led the hunger strike joined by several hundred leaders and activists of the party and its front and associated organisations in front of National Press Club for two hours from 11:00am.
The hunger strike was broken by former Dhaka University vice-chancellor Emahuddin Ahamed.
Fakhrul, in his very short speech, said that they curtailed the hunger strike by three hours at the request of the ‘authority.’
He demanded immediate release of Khaleda and asked the government to refrain from all ‘repressions.’
As a contingent of police, who took position close to hunger strike, started to advance towards the protesters at about 1:00pm, almost all the participants moved away.
Additional police were deployed at the venue and water cannon and prison van were also placed there.
Many leaders and activists of BNP were seen going away after joining the hunger strike for some time while many were gathered scattered way without sitting for the hunger strike.
BNP-led alliance leaders including Andaleev Rahman Partha of Bangladesh Jatiya Party, Mohammad Ishaq of Khelafat Majlish, Mostafa Zamal Haider of Jatiya Party (Zafar), Syed Muhammad Ibrahim of Kalyan Party, Mustafizur Rahman Iran of Labour Party and Golam Mostafa Bhuiyan of Bangladesh National Awami Party, expressed solidarity with the hunger strike.
BNP standing committee member Moudud Ahmed at the hunger strike said that their current movement was for freeing Khaleda from jail and realising the demand for holding a fair and neutral general election.
He said that it was a political verdict to serve political purpose to belittle Khaleda.
He said that no election would be allowed to be held without Khaleda.
BNP standing committee member Khandakar Mosharraf Hossain said that the government was playing with fire.
In the Supreme Court, Jatiyatabadi Ainjibi Forum observed hunger strike in front of the Supreme Court Bar Association building for an hour from 1:00pm.
A special judge’s court set up at Bakshibazar on February 8 jailed Khaleda for five years and her eldest son Tarique Rahman, now BNP acting chairman, and four others for 10 years in Zia Orphanage Trust graft case.
Tarique has been staying in London since September 2008. 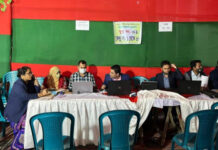 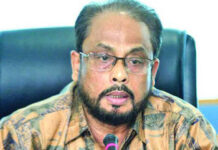 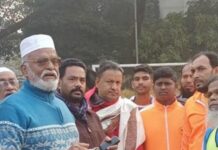