John Avlon is a senior political analyst at CNN. The opinions expressed in this commentary are his own. View more opinion on CNN.

(CNN)The streets of New York are filled with ghosts these days. It is spring outside, but the sidewalks are empty and the streets feel haunted. Only sirens pierce the silence. Some of the familiar faces will come back when this pandemic passes; others will not. 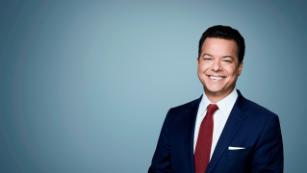 The numbers alone can numb us: in New York City now, there are more deaths in a single day than murders in the past year; to date we’ve lost more than four times the number of people the city lost in the attacks of 9/11. These numbers, of course, have names. They leave behind families who mourn them and stories that deserve to be told.
One of those stories belongs to Mohammed Jafor.
He was an immigrant and a father. He drove a yellow cab to get his kids the best education our country can offer. He did everything right to achieve the American dream. And he died on April 1st — leaving his three children orphaned in an apartment near Gun Hill Road in the Bronx.
But his story is not simply a tragedy. It is a triumph that he only got to see the start of.
If you were in New York, you may have been in his cab and never thought about the person on the other side of the plexiglass. But he was the kind of man who began his workday by dropping his daughter Sabeeha off for second grade at the prestigious Trinity School on the Upper West Side of Manhattan. He would drive all day and then pick her up when school was over.
There was already evidence of success from his hard work. Sabeeha was following in the footsteps of her brother, Mahtab, who is now a double major in economics and history at Harvard University.
“He worked all his life and gave away so much,” Mahtab Shihab told me over the phone. “He didn’t have any type of job that was incredibly profitable or anything. He worked at McDonald’s. He was a deliveryman. He was a cab driver. But he always wanted to make sure that his family, both at home and in Bangladesh, had everything they needed. He would make that sacrifice again and again.”
This is the American story of every immigrant — from the Trumps to your family and mine. The details change, but the arc is the same: they come here to build a better life through hard work in the hopes that their kids will have more opportunities than they did. And they often appreciate America more than those who were born here. 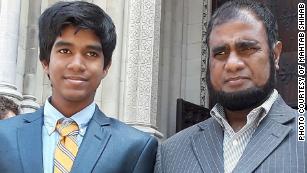 Mohammed Jafor with his son Mahtab Shihab at his high school graduation in 2018
Mohammed Jafor’s American story began in 1991 when he arrived from Bangladesh. He lived in an overcrowded apartment with other immigrants in Jackson Heights, Queens. He saved his money, sending it home to support his parents. Then he went back to Bangladesh to marry his bride, Mahmuda Khatun, and have their first child, Mahbub Robin, before returning to New York.
In 2000, Mahtab Shihab was born at Elmhurst Hospital, now known as ground zero of the coronavirus pandemic.
Even in the family’s early days, their values were clear: “He wanted to make sure that we understood the privilege and the opportunity we had of being in America and how thankful we should be for that,” Mahtab said “He wanted to make sure we used all of the opportunities and resources that were at our disposal. And part of that was having a very good education.”
The kids started out at PS 95 in the Bronx, but Mohammed heard about a non-profit recruitment program called Prep for Prep, which enables lower income kids of color from New York City to attend excellent but expensive private schools. Mahtab started at Trinity School in the 7th grade. Classmate Will Cramer became one of his close friends and a debate club partner. He recalled Mahtab as “so nice, so kind to everyone around him,” — perhaps a bit guarded — but “once you get to know him, really bubbly and fun and charismatic.”
Tragedy struck the family in 2016, when their mother, Mahmuda, passed away from cancer. The pendulum of life swung the other way the next year when Mahtab was accepted at Harvard and his little sister began kindergarten at Trinity. Their pride was limitless. The future seemed bright. Then tragedy came again.
In March, Harvard shut down and Mahtab came home. His father was already self-quarantining — only leaving the apartment once to make sure that his taxi-driving job was secure. He came down with a slight fever for a few days but then started suffering from severe shortness of breath. His kids took him to Montefiore Medical Center, where, his son recalled, he was put on a ventilator for a week. He seemed to be improving. Then he died.
Mohammed Jafor was just 56.
Word spread quickly. When Mahtab’s friends heard the terrible news, they rallied around the family. Will Cramer helped set up a GoFundMe campaign. It was one way to deal with the there-but-for-the-grace-of-God-go-I of it all.
The donations came in, big and small, from every community he’d worked his way through, Mahtab says — from Prep for Prep to Trinity and Harvard. “They understood that we would be in a very financially difficult situation,” with the heart-wringing prospect of supporting a second grader without parents.
Within days, supporters raised $250,000. It was a moment of grace in a sea of troubles — a lifeline that can restore your faith in community. We come together best in times of crisis — even when we have to stay apart to stay alive.
Even with extended family and friends, there will be difficult days ahead. There is no substitute for a dad and mom. But one source of comfort should be the now undeniable fact that while the children of Mohammed Jafor are orphans, they are not alone. The hard work their father did driving through the streets of New York in his yellow cab provided opportunities that will sustain them for years to come.
“He never really got to see the fruits of his hard work,” Mahtab told me in a quiet voice. “The fact that me and my brother were almost at the point where we’re doing our own careers, having these independent paths that were paved by my father.”
But there is such a thing as self-evident truth. America is resilient and so are our immigrant families. We have proven this over and over and we will again.

AL leader held in Rajshahi with government rice for poor