Troubles in Bangladesh are beginning to spoil its reputation among foreign companies that had flooded into the country—and are highlighting risks to investors looking for new manufacturing bases cheaper than China. 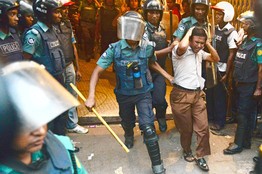 Bangladeshi police detain an opposition activist during a protest in Dhaka on March 11.

An upswing in the past few years that had lifted this impoverished South Asian nation into one of the world’s top clothing exporters now risks slipping through its fingers after a series of tumultuous events.

Violent protests this month over the sentencing of three Islamist opposition leaders for war crimes during Bangladesh’s 1971 war of independence have led to at least 60 deaths and widespread strikes.

The protests come on the heels of two apparel factory fires, one in November and a smaller one in January, which killed a combined 119 Bangladeshi garment workers and attracted widespread negative press overseas. Rights groups said the fires reflected sometimes-dangerous working conditions and lax enforcement of labor standards in an economy that has become a major supplier to American and European retailers.

Now, some companies are speaking of the country in the past tense. 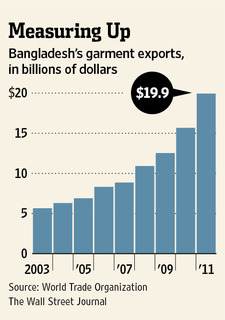 “Bangladesh was a good place to do business. But you have to read the political trends in the world,” says Christophe Roussel, chief executive for global nonfood sourcing and logistics at Tesco Corp., TSCO.LN -2.16% the world’s third largest retailer after Wal-Mart Stores Inc. WMT +0.19% and Carrefour CA.FR -0.14% SA.

“We are already moving away from Bangladesh,” adds Veit Geise, vice president for sourcing at VF Corp., VFC -0.07% a Greensboro, N.C., company that owns brands such as Wrangler, Timberland and Nautica. “How many eggs do you want in a basket that’s basically a powder keg?” Both men were speaking at a meeting of supply-chain executives about sourcing goods in Asia sponsored by the French Chamber of Commerce in Hong Kong.

It isn’t the first time pessimism arises around Bangladesh’s garment industry; in 2005, the lifting of textile quotas fed worries that smaller garment-producing countries would be crushed by China’s greater ability to export. But despite such concerns, Bangladesh’s exports have continued to increase. According to data supplied by Bangladesh’s Export Promotion Bureau, garment exports grew by more than 10% in the first eight months of the fiscal year ending in June, helped by diversification into emerging markets.

Any effects of concerns around the recent volatility won’t be seen for a while. Nevertheless, in the latest period, exports to traditional markets in Europe and North America slowed to a combined growth of around 5% from a year earlier. Analysts say this may be a reflection of nervousness among the world’s largest retailers due to sluggish economies as well as a reluctance to risk shipment delays.

The latest unrest ignited Feb. 5 when a war-crimes tribunal sentenced a senior Islamist politician to life in prison. Two other opposition figures have been sentenced to death, sparking what many have called Bangladesh’s worst riots since independence from Pakistan. Local producers say they also are suffering from the turmoil.

“We are badly hit,” says Rubana Huq, managing director of Mohammadi Group, a large garment exporter. “Thousands of trucks carrying goods to Chittagong port have been burned or damaged during strikes in the last two weeks. Manufacturers are chartering cargo aircrafts to make up for lost time. The country’s image has been badly damaged.” 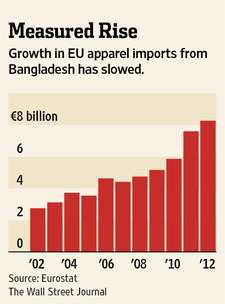 Bangladesh had been one of the biggest beneficiaries of a major reordering of the world’s low-end manufacturing in the past few years. Rising pay in China has forced companies to find less costly production locales, especially for goods that require armies of laborers such as apparel, shoes and linens. Bangladesh’s exports of clothes have nearly doubled since 2008, creating thousands of jobs and putting a new sheen on the long-struggling economy.

But what many companies have found is that countries like Bangladesh—which seem like alternatives to China, including Cambodia, Vietnam and Indonesia—have their own obstacles. While worker pay might be lower, political instability, poor infrastructure, recurring strikes and labor-law complexities can add their own costs. China’s deep supply-chain network is hard to replicate quickly elsewhere, making it difficult for some factory owners to move. Nike Inc. NKE -2.24% recently said only eight of the 896 factories it worked with in 2011 were in Bangladesh as it reduces its exposure to countries that present reputational risks.

That means there could be a limit to how much production actually leaves China in the coming years, economists say.

Tesco has already moved aggressively to diversify its sources of goods away from China. The low-price retailer has reduced its reliance on Chinese factories from about 80% of its goods a few years ago to 60% today, Mr. Roussel said, with Bangladesh playing a major role in that transition.

But after recent volatility in the country, Tesco is thinking twice. “We were overloaded in Bangladesh,” Mr. Roussel said. “It’s not about the conditions in the factory; it’s the country itself.”

Tesco is looking for manufacturing sites closer to its core European markets, such as Turkey, Eastern Europe and Africa. But China will remain its biggest supplier, he says, as China will remain dominant in industries such as toys and electronics.

Any further loss of investor interest in Bangladesh would mark a big lost opportunity for the country, which remains one of the poorest in Asia, with a per capita gross domestic product of less than $2,000 and a history of natural disasters.

What it does have going for it is a large population, with most of its 150 million people of working age, and relatively low wages, which helped fuel a manufacturing boom centered around garment making. After years of rapid growth, Bangladesh’s clothing exports have hit close to $20 billion, nearly as much as the second-largest exporter, Italy, according to World Trade Organization data. China, the world’s largest clothing exporter, sent abroad $154 billion of clothes in 2011.

Neighboring India has looked on with envy as Bangladesh scooped up more business in recent years. India’s garment exports are expected to be around $13 billion this fiscal year which ends in March, around the same as last year and short of the government’s target of $18 billion.

But now India sees an opening. A Sakthivel, chairman of India’s state-backed Apparel Export Promotion Council, estimates around $500 million of orders have shifted from Bangladesh to India in the past four months. “Some of the buyers are coming back to India,” he says.

Azizur Rahman, a senior official of the Bangladesh Export Processing Zone, denied that foreign investors may be pulling out. “The government is determined to keep the export-oriented industries free from political strife,” he said. “We have plenty of investment in the pipeline and we hope to maintain our rapid growth.”

The government has remained bullish, setting an export target of $28 billion for the 2013 fiscal year ending June 30.

But many manufacturers around Dhaka are skeptical. Garment-industry leaders say buyers have canceled scheduled trips due to the unrest, while manufacturers have incurred steep transport costs to make deadlines.

“The orders are still coming, but we will see the negative effect of the political upheaval in the coming months,” said Ahsan Mansur, executive director of the Policy Research Instute, a Dhaka-based think tank.

Bangladesh’s textile industry is also facing challenges in keeping wages low. Although the minimum wage set by the government of $36.50 a month has remained the same since 2010, wages are set to be reviewed by the government next year, and pressure from labor groups has been rising.

Owners were forced to temporarily close 300 private garment factories in the Ashulia industrial belt outside Dhaka in June last year after clashes between workers and police. The factories reopened after three-way talks between government ministers, manufacturers and workers’ unions, and the government promised to give ration cards to workers to buy commodities at subsidized rates.

All those pressures mean more foreign companies may move to reduce exposure to the country, and potentially other nations seen as alternatives to China.

“We source significantly from Cambodia and Bangladesh, but we do want to put a kind of cap on those countries,” says Richard Thomas, head of Far East for U.K. department-store chain Marks & Spencer MKS.LN -0.61% . “There are the political issues and risks associated with them. My personal view is that you shouldn’t source more than about 25% of your goods globally from a place like that.”