Young batsman Mohammad Naim played one of the finest Twenty20 knocks for Bangladesh but the Tigers fell short by 30 runs in the third and final Twenty20 international against India in Nagpur on Sunday.
The hosts bowled out Bangladesh for 144 on the back of Deepak Chahar’s 6-7 and a hat-trick to claim the series 2-1, despite Naim’s 81 off 48 balls Vidarbha Cricket Association Stadium
Set a target of 175 runs, Bangladesh seemed coasting once Naim, who hit 10 fours and two sixes in his maiden Twenty20 fifty, put 98-run with Mohammad Mithun for the third wicket.
But the Tigers lost their way after Chahar, who has now become the first Indian to claim a hat-trick in Twenty20 international, dismissed Mithun (27) and Mushfiqur Rahim ( 0) off successive deliveries.
Shivam Dube (3-30) bowled Naim two overs later and then claimed the wicket of Afif Hossain the next ball to hand India finally the upper hand.
The game ended as contest when Yuzvendra Chahal bowled Mahmudullah for eight.
Chahar earlier dismissed Liton Das (nine) and Soumya Sarkar (0) off successive balls to reduce Bangladesh to 12-2.
But Naim and Mithun controlled their innings beautifully to give India few tensed moments before Bangladesh found their way to lose a game they should have won.
Bangladesh earlier started the game positively with the ball l but dropped a catch at crucial moment to allow India post a competitive score.
Shreyas Iyer made Bangladesh pay for the drop hitting 62 off 33 balls to guide India 174-5 after Mahmudullah won the toss and elected to bowl first.
Shafiul Islam removed both the openers Rohit Sharma for two and Shikhar Dhawan for 19 and then created a chance for Bangladesh to put India under more pressure when he forced Iyer to give a catch at point in the first ball he was facing.
Aminul Islam dropped the straight forward catch and India took the full advantage to take the control of the game.
KL Rahul, who also made 52 off 35 balls, put 89 runs with Iyer putting the pressure back on Bangladesh.
Al-Amin Hossain removed Rahul in his second spell but Iyer threatened to take the game beyond Bangladesh’s reach adding 45 runs with Rishabh Pant for the fourth wicket.
Iyer struck Afif for three consecutive sixes in his only over before Soumya Sarkar (2-29) dismissed both the batsman in the same over to provide Bangladesh some respite.
Pandey was unbeaten on 22 to ensure India got a competitive score as Shafiul finished with 2-32. 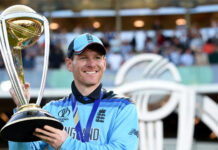 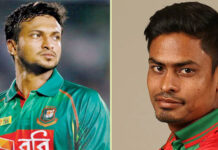